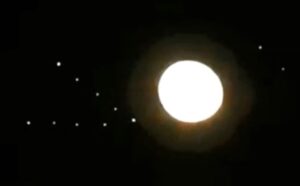 New Yorker, July 25, 2021 captured a UFO fleet that appeared against the background of the Moon.

This video was commented on by the famous Taiwanese ufologist Scott Waring.

He called the video amazing and believes that the group of luminous UFOs is not really close to a natural satellite. It seems that the mysterious objects are in front of him.

In the video, a group of bright UFOs smoothly forms a triangle, and an eyewitness suggests that by doing so they are trying to tell us something. Perhaps they want to warn us about something, argues the author of the video.

Of course, this is all guesswork, since no one knows who the UFO belongs to.

At first, the man did not want to publish this video, but later decided that the world community should see it.

Perhaps someone will be able to understand what the aliens wanted to say to people.