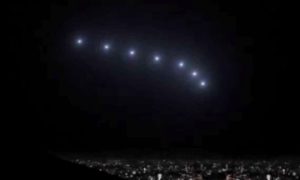 People from different places report seeing “extra stars in the constellations” or notice how “stars” begin to fly away from the constellations. The last such case was recorded by an eyewitness in Australia in the night sky near Alpha / Beta Centauri.

According to the person who recorded the video, “These objects were observed almost every night for two weeks”

It seems that they differ in behavior, often moving across the sky from right to left, but movements in the opposite direction were also recorded, although much less often.

Sometimes they appear only one UFO with a pause of several minutes between observations, but recently their frequency has increased to such an extent that you can see several UFOs that appear from one point in the sky and follow one after another. ”

The data is confirmed by other residents of Australia. For example, there is a report from Melbourne (the capital of the Australian state of Victoria):

“I also saw this from Melbourne around midnight on Monday this week, as did a friend of mine who lives about 5 km north of me. I wonder what it was.

“The object was stationary and at first I thought it was a star, but it was superfluous in that constellation, and then this “star” began to move, quickly diagonally and up to the right, and then I lost sight of this object behind the trees. ”

There is confirmation that something strange has been happening from the United States in recent days:

“I saw something very similar tonight in South Carolina, USA. My roommate and I were looking at a very bright light that flickered red and green (it was definitely not an airplane, as it was in the same place for several minutes), and then disappeared.

“We went down to look past the building, and saw something very similar to what you wrote. It looked like stars, but they twinkled and were clearly superfluous in the constellations, and then they just took off and quickly descended hiding behind the horizon. “