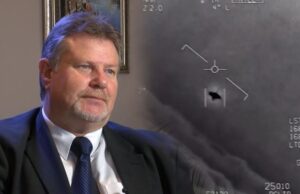 The American expert referred to a video in which a US warship collides with an unidentified flying object.

Ufologist Gary Heseltin stated that aliens do not come from space, but from the depths of the sea. The expert told the British tabloid The Sun about this, referring to a video with strange under water UFO collisions with US warships.

“UFOs are often seen coming in and out of water so suspect that in our deepest oceans and trenches we may well have alien bases,” Mr Heseltine said.

According to the expert, we know much more about the surface of the Moon and Mars than about the depths of our waters, which are studied only by 5%.

In addition, judging by the observations of experts, UFOs periodically appear over the seas.

Mr Heseltine also added there appears to be a correlation between UFO encounters and the world’s nuclear capabilities.

He told The Sun Online: “There is a massive correlation between UFOs being seen near nuclear facilities, whether it’s nuclear aircraft carriers, nuclear submarines, nuclear weapon storage areas, power plants.

“This would seem to indicate that it’s as if they’re saying ‘we don’t like nuclear weapons’ so they show up.

“Maybe they realise we could destroy this beautiful planet.”

“This may indicate that they’re saying, ‘We don’t like nuclear weapons’. Maybe they understand that we can destroy this beautiful planet,” Heseltine said.

Mr Heseltine spent six years working with the Royal Air Force police, 24 years with the British Transport Police, and launched a national database for UFO sightings for cops whiles till a serving officer in 2002 – before retiring from the force in 2013 to focus on his research.

On Earth, There May Be Creatures More Intelligent Than Humans