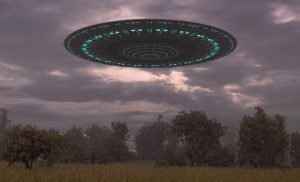 UFOs are credited for performing many scientifically advanced feats such as abduction in a beam of light and invisibility.

It’s said that alien beings in UFOs can raise people up to their ship in a beam of light. It’s also said that UFOs can employ a sort of invisibility cloak. Could this really be possible?

Here’s a look at current technology and possible explanations for the advanced science and technology that extraterrestrials are said to possess.

Alien Abductions and How Abductees are Beamed Up

So-called abductees and witnesses claim that people are brought up to the alien spacecraft in a beam of light. Sound like shades of Star Trek? It’s not as impossible as it sounds.

In 2009, scientists had the capability of using light pressure from laser beams to move very small objects like cells and they can even tie DNA in knots using lasers.

So a more advanced technology that enables aliens to “beam up” an abductee seems like it may be theoretically possible.

It has been asserted that UFOs have the technology to disappear under a cloak of invisibility. How does that stack up to what human science can do?

In 1999, physicists from the Harvard Smithsonian Center for Astrophysics found that they could slow the speed of light to a mere 38 miles per hour compared to is normal speed of 186,000 miles per second.

By slowing light in rubidium, (a gas) and then shining a second laser of a different frequency through the gas, they were able to cause it to become transparent.

Perhaps this is the precursor to the claims of alien technology and their ability to render themselves invisible?

Many people who claim to have been abducted report that either eggs or sperm were removed from them during their abduction. These supposedly were used to create hybrid babies.

Once again, it sounds like an impossible feat, but how Twilight Zone is it really? Pigs have previously been inserted with human genes in order to make them more human for organ transplant purposes.

Scientists have been able to transfer genes that elicit a certain behavior from one bird to another. The result? Chickens who can sing like quails.

Genetically engineered goats and cows that have human genes have been cloned for the purpose of certain drugs in their milk that are useful to humans. Somehow, the idea of a human/alien hybrid doesn’t seem so far-fetched in light of man’s current technology.

As far fetched as some of the claims regarding UFOs, abductions and alien technology seem to be, current science shows that the possibility of this kind of technology is real.

Keep in mind that the idea of space travel or even something so simplistic as refrigeration, at one point in time, seemed completely unrealistic.

Is it possible to beam people up into a spaceship or render a vehicle invisible? Perhaps it’s not as impossible as it sounds.