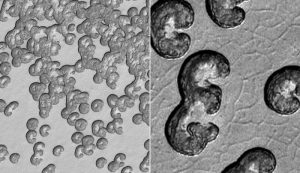 Popular Taiwanese ufologist and conspiracy theorist Scott Waring viewed on the official website of the US National Space Agency images of the Martian south pole, taken on April 13, 2004 by unmanned research station “Mars Global Surveyor”, and found in one image something amazing.

In one of the sections of the Red Planet, the probe captured an incomprehensible thick accumulation of certain objects, very similar in shape to the letters.

NASA experts will surely say that all the fault of some carbon dioxide frozen at the south pole of Mars and having acquired such an amazing structure.

However, Scott is not going to believe scientists. According to the ufologist, carbon dioxide ice cannot have such an even and symmetrical appearance. Waring assumes that it is a matter of futuristic structures, once erected on a distant celestial body by representatives of an advanced extraterrestrial civilization.

“However, this suggests a very natural question: why do NASA employees even put all these intriguing images on the Internet?”

Many alternative researchers believe that in this way scientists lull our vigilance, distracting us from the realities of our “cosmic reality”, which is much more difficult than ordinary people imagine.

For example, there is a theory that NASA scientists know about Mars, the Moon, our solar system, and in general about the Universe such things that we cannot even imagine. But they cannot tell the whole truth to the general public, because otherwise, we need to revise our entire academic science.