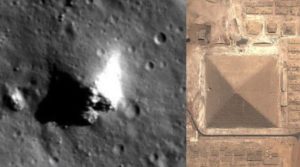 Ufologist Scott Waring told about another incredible discovery on the moon. According to the researcher, he was able to find an ancient pyramid on a natural satellite of the Earth, very similar to the Egyptian one.

In support of his words, the ufologist demonstrates a NASA snapshot and a screenshot from the Google Earth service. Waring believes the structure is about 1 kilometer in size.

The site from which the image was obtained has been approved by NASA for use by scientists. The ufologist also said that he found more interesting things there.

The independent researcher is confident that this photograph proves that ancient aliens arrived on Earth thousands of years ago.

Virtual archaeologists regularly look for signs of extraterrestrial life on the nearest space objects – on Mars and the Moon.

On the surface of the natural satellite of the Earth, UFOs are constantly recorded on video and strange “ancient buildings” are discovered. According to ufologists, these findings confirm that the Moon is still used by extraterrestrial civilizations for interplanetary flights.