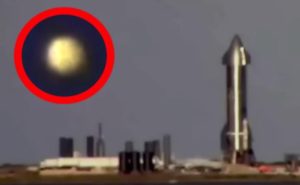 On December 8, 2020, a test launch of the SpaceX Starship prototype with serial number 8 was planned from the site in Boca Chica, Texas, USA, but the launch was abruptly canceled.

According to the official version, “1.3 seconds before the start, SpaceX’s automatics canceled the launch due to a problem with the Raptor engine.

The company then stated that it had postponed the launch for a day and would likely try again day later. As is already known, during the repeated attempt to launch the rocket, the Starship 8 exploded. Moreover, before the explosion, a UFO was seen near the ship.\

Now it turns out that the cancellation of the launch on December 8 was also associated with the appearance of a UFO directly near the launch pad.

Apparently, SpaceX did not appreciate the severity of the incident, and the attempt to launch the next day ended in disaster.