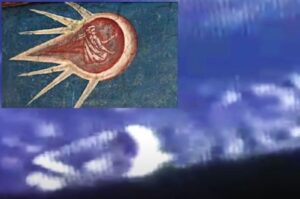 The researcher claimed to have discovered a UFO strikingly similar to an object from an ancient icon dating from 1350.

Researcher MrMBB333 reported on his Youtube channel that the mysterious UFO “looked almost identical” to an object from an orthodox work of art dating back to 1350.

MrMBB333 points to the ISS footage captured by his fellow ufologist two weeks ago. The video shows a tapered object with a contrail sweeping past the SpaceX Starlink launch vehicle. At the moment of its appearance, a pointed tip and an arcuate edge emerge from the lower right corner.

The painting depicting the Crucifixion of Jesus Christ and the unusual objects in the upper corners have attracted the attention of so-called truth seekers around the world.

The UFO Hunter says, “They have a striking resemblance! Coincidence? I don’t know. This picture shows two UFOs, and they both had the same shape as this object directly below the ISS. ”

One said, “Wow, this is crazy. UFOs and that old picture are very similar. ”

Another added: “When I saw a UFO and a picture similar to it, I was shocked.”

Other commentators were more skeptical, saying it was nothing more than space debris.