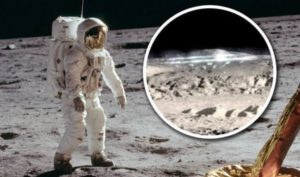 UFO sightings in outer space are sightings of unidentified flying objects reported by astronauts while in space that they could not explain at the time. These sightings have been claimed as evidence for alien visits by ufologists.

In 1996 Gordon Cooper related his own UFO experiences to the public. He reported his sightings to Project Blue Book but received no response.

In 1951 Cooper was a fighter pilot assigned to the 525th fighter Bomber Squadron at Neubiberg AFB in Munich, Germany. Once while flying an F-86 Sabre Jet, he saw “an armada of flying saucers.”

He went on to say that he as well as other pilots gave chase but could never get close enough to see any details except that they were metallic and saucer shaped.

Neil Armstrong and Buzz Aldrin reported that they saw UFOs during their historic landing on the Moon during the Apollo 11 flight on July 21, 1969.

Armstrong said that Aliens have a base on the Moon and told them in no uncertain terms to get off and stay off the Moon.At a NASA symposium, Armstrong commented on what really did happen with Apollo 11.

“We had always known that there was a possibility; the fact is, we were warned off by the Aliens. There was never any question then of a space station or a moon city…Their ships were far superior to ours both in size and technology. Boy, were they big and menacing! No, there is no question of a space station.”

Armstrong went on to say that the other missions after Apollo 11 continued because NASA was committed to the program at that time and couldn’t risk panic on Earth. “But it really was a quick scoop and back again.”

The Gemini astronauts, James Lovell and Frank Borman saw a UFO during the second orbit of their 14 day flight. Borman reported to Gemini Control that he saw a UFO from their space capsule.

The Control Center told him that he was seeing the final stage of their own Titan booster rocket. Borman confirmed that he indeed could see the booster but he could also see a completely different object as well.

Chatelain was the former chief of NASA Communications Systems during the Apollo 11 flight. In 1979, he confirmed that Armstrong did report seeing two of the UFOs resting on a crater rim observing the astronauts.

“The encounter was common knowledge in NASA,” he said. The public never heard the exchange because NASA censored it. It is his belief that some UFO’s may come from Saturn’s moon, Titan, in our solar system. They followed the Apollo and Gemini flights. With each incident, the astronauts reported the sightings to Mission Control who then ordered absolute silence.

Malcolm Scott Carpenter was an American naval officer and aviator, test pilot, aeronautical engineer, astronaut, and aquanaut. He was one of the Mercury Seven astronauts selected for NASA’s Project Mercury in April 1959.

Scott Carpenter had this comment on the NASA ventures, “At no time, when the astronauts were in space were they alone; there was a constant surveillance by UFOs.”

Former Senator and astronaut, John Glenn, playing himself on the Frazier radio program made these remarks on March 6, 2001 during the show:

“Back in those glory days, I was very uncomfortable when they asked us to say things that I didn’t want to say, and deny other things. Some people asked, you know, ‘Were you alone out there?’ We never gave the real answer.

And yet, we’ve seen things out there, strange things. But, we know what we saw out there and we couldn’t really say anything. The bosses were really afraid of this, they were afraid of the War of the Worlds type stuff and about panic in the streets.

So, we had to keep quiet. And now, we only see these things in our nightmares…or maybe in the movies, and some of them are pretty close to being the truth…”

We don’t know if indeed NASA has been involved in a conspiracy theory to hide or explain away UFO sightings. Two American presidents, Ronald Reagan and Jimmy Carter, experienced UFO sightings.

Ronald Reagan was very much concerned about a possible alien threat; so much so that he mentioned it in several of his speeches, including one to the United Nations. It seems that perhaps the evidence is out there…somewhere.

Abduction by Aliens: The Most Terrifying Unexplainable Experience