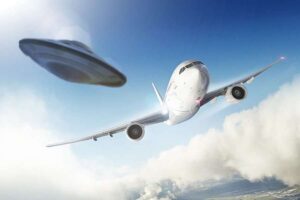 Between about 8 and 10 o’clock on the night of March 13, 1997, hundreds of people near Phoenix reported spotting mysterious clusters of lights in the sky. A number of witnesses said that many of them seemed to come from a brightly lit, V-shaped craft, the size of at least several football fields.

“It was astonishing, and a little frightening,” one local resident said. School administrator Susan Watson still remembers watching with her children as the massive object she describes as a “floating” city passed silently over their home.

“Air National Guard spokesmen later suggested the witnesses may have seen military flares that were dropped that night, while some proposed that observers were confused by aircraft flying in formation. But these explanations left many unsatisfied, particularly one witness who, for a decade, was reluctant to acknowledge he had also seen the vehicle: Fife Symington III, Arizona’s governor at the time. 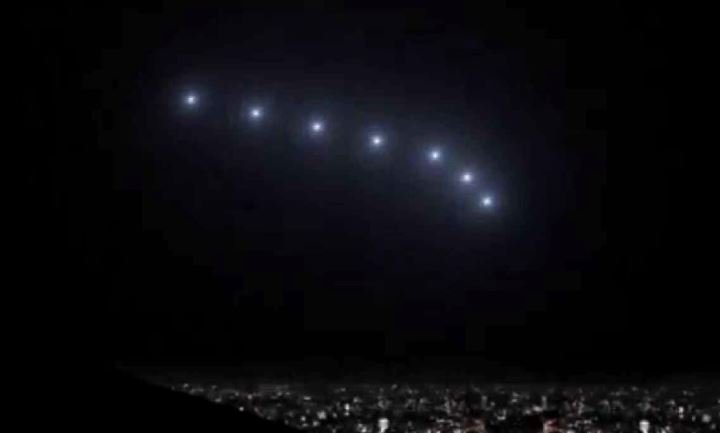 “I’m a pilot, familiar with most aircraft,” Symington now says, “and what I saw is nothing like I’ve had any knowledge of.”

Thousands of unidentified flying objects are reported each year by the public. The fascination with UFOs has become a fixture of contemporary culture and a staple for science fiction writers and supermarket tabloids. But in response to the central question—are they alien spacecraft?—most officials and academics dismiss the idea of extraterrestrial visitations as unlikely in the extreme.

Yet an increasing number of researchers and public officials say the subject of UFOs is long overdue for more serious treatment.

They’re a “mystery that science needs to engage in,” argues journalist Leslie Kean, who spent over a decade interviewing former military officers, government officials, scientists, and eyewitnesses while accessing previously classified government records for her 2010 book UFOs: Generals, Pilots, and Government Officials Go On the Record.

Generally, a UFO is defined as a phenomenon in the sky—be it a light, solid object, or a combination of these—whose true nature or source can’t be determined. Those who study UFOs say that some 95 percent of sightings can later be explained as ordinary man-made objects or naturally occurring phenomena, from flares and military aircraft to weather oddities or reflections of the planet Venus. But that still leaves about 5 percent that seem to defy rational explanation.

“The bottom line is we don’t know what they are,” says Kean, a former broadcast radio producer and veteran investigative journalist who has contributed to publications like the Boston Globe, the International Herald Tribune, and The Nation.

The public’s fascination with UFOs is a modern expression of an age-old enchantment with remarkable events in the skies, notes Albert Harrison, professor emeritus of psychology at the University of California–Davis and author of the 2007 book Starstruck: Cosmic Visions in Science, Religion, and Folklore.

“Signs from the gods, omens, and portents have been replaced by space-age visitors that have remarkable god-like qualities and power,” he says.

It wasn’t until after World War II that interest in space-age visitors—and UFOs—really seemed to take off, and then it did so in a spectacular way. On June 24, 1947, salesman Kenneth Arnold was flying his private plane near Mount Rainier in Washington when he spotted a chain of nine, brightly lit objects moving at incredible speed near the mountain’s peak. 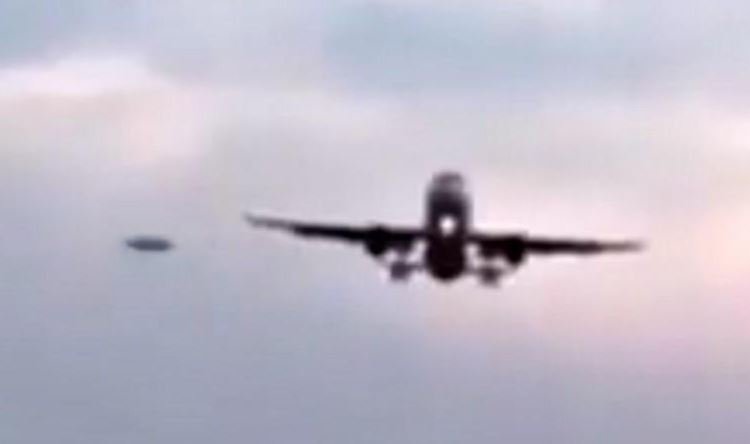 Arnold described each of them moving “like a saucer would if you skipped it across the water,” ushering the phrase “flying saucer” into common parlance. As with many such sightings, various explanations were offered—a mirage or meteors, for example—but in the eyes of many people the mystery was never resolved.

Public interest in UFOs continued to grow in the 1950s and ’60s as the idea of manned spaceflight to other worlds led many people to imagine what—or who—might be traveling the other way.

As reports of UFOs proliferated, media coverage seemed to inspire even more reports. Concerned about potential threats to national security, the government began to investigate. Its most notable program, the Air Force’s Project Blue Book, began in 1947 and involved the analysis of some 12,600 UFO reports over two decades, most of which were categorized as misidentified natural or man-made objects, such as weather balloons or high-speed aircraft.

By the end of 1969, the Air Force declared that none posed a threat or involved an extraterrestrial vehicle. The project’s leaders did acknowledge, however, that they could not come up with an explanation for about 700 of the incidents.

That margin of mystery continues to thrill diehard believers around the world, many of whom have organized into groups dedicated to studying UFOs and cataloguing and tracking sightings.

The Mutual UFO Network, for example, boasts about 3,000 members in all 50 states and more than a dozen countries. MUFON receives about 500 reports of UFO sightings a month, and some 1,000 volunteers investigate what they see as the most credible ones by interviewing witnesses and collecting photos, radar data, and other evidence.

Former United Airlines pilot Neil Daniels was one witness who shared his story with Kean. On March 12, 1977, Daniels was piloting a DC-10 on a routine flight from San Francisco to Boston. The aircraft was operating on autopilot when it suddenly started to turn left.

Looking through the cockpit window, he and several other members of the United crew saw a brilliantly lit ball, roughly the size of their own plane, about 1,000 yards away. Daniels then noticed three of his compasses were pointing in different directions.

After a few minutes, the glowing ball flew off at high speed. “Whatever it was, it wasn’t an airplane,” said Daniels, who passed away in May at his home in Los Altos, Calif. Air traffic controllers later reported they had not noticed any unusual radar traffic in the area, and the incident wasn’t investigated further.

Even when government officials do try to examine a UFO sighting, they can be stymied by elusive—or vanishing—evidence. In Kean’s book, a pilot in the shah-era Iranian air force describes a UFO encounter that Kean also found referenced in U.S. intelligence files.

On Sept. 18, 1976, civilians and military officials at an air base near Tehran spotted a large diamond-shaped object with pulsating colored lights flying over the city in the late evening. Two fighter planes, including one piloted by the major who recounted the event, were scrambled to intercept the craft, which was also picked up on radar and described as being about the size of a 707 tanker jet. 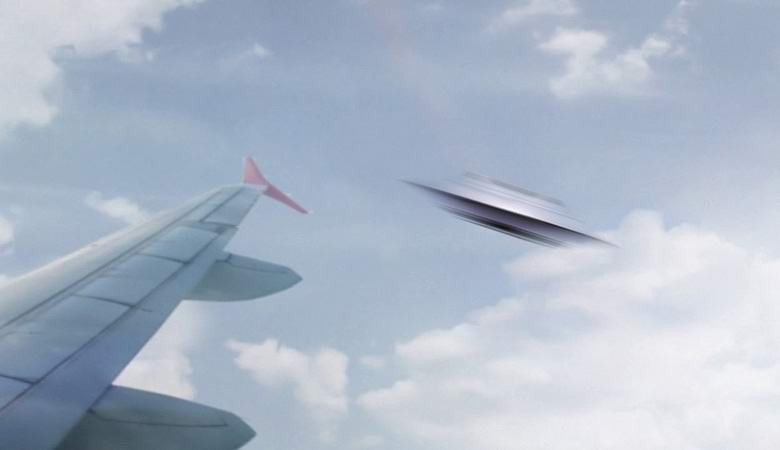 The major reported that, as he approached, the UFO seemed to emit a projectile. Believing it was a missile, the officer tried to return fire, but his weapons wouldn’t respond.

Though he said the “missile” appeared to land on the ground below, no evidence of it was found. The larger craft disappeared from the sky in an instant. A U.S. Defense Intelligence Agency review later that year called the incident “a classic which meets all the criteria necessary for a valid study of a UFO phenomenon.”

Kean points out that countries like France and Chile maintain official government agencies to handle this kind of investigation, but the United States does not. The Federal Aviation Administration simply advises pilots to report any incidents to private UFO groups or to local authorities if they believe property or people are threatened. This official lack of interest is a concern, Kean says, because of the potential dangers posed by some incidents.

In one case, on Nov. 7, 2006, a dozen or so United Airlines workers at Chicago O’Hare International Airport spotted a gray metallic-looking disk apparently hovering for several minutes above an airport gate before shooting upward and vanishing, leaving a hole in the cloud cover.

The witnesses, including mechanics, pilots, and supervisors, shared their accounts with the Chicago Tribune, which covered the story. The FAA suggested they had seen a “weather phenomenon” and didn’t formally investigate, Kean says, despite the potential intrusion of an unknown craft in the airspace of one of the nation’s busiest airports.

“The FAA’s mission does not involve the investigation of UFOs,” says agency spokesman Tony Molinaro, adding, “Our employees didn’t see anything unusual and nothing caused any operational problems that day.”

In fact, many experts are more concerned about the hazards these sightings pose to aviation than about the potential for alien involvement. When flight crews are distracted by what’s going on “outside the window,” they are focused on that and “not flying the airplane anymore,” says Richard Haines, a former senior research scientist at NASA’s Ames Research Center who is now chief scientist of the National Aviation Reporting Center on Anomalous Phenomena, a private research group focused on flight safety related to unidentified aerial phenomena.

Kean agrees, particularly since pilots have reported encountering some of the more bizarre sights in the sky, including metallic disks, massive cigar-shaped craft, green spheres, and highly agile objects that seem to stop, accelerate, and turn in response to a pursuing pilot’s maneuvers.

Haines believes only about 5 to 10 percent of incidents ever get reported, in part because professional pilots fear ridicule and potential damage to their careers.

“I really think we need to make it permissible to study these things without risking your reputation,” says John Alexander, a retired U.S. Army colonel and author of the 2011 book UFOs: Myths, Conspiracies, and Realities.