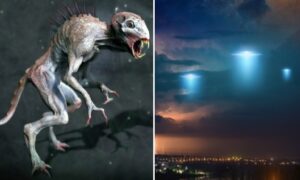 Residents of the city of Santa Cruz (Bolivia) talked about their encounter with a mysterious cryptid, which, according to them, walked the streets of the city, reports “Radio Miter”.

Local residents gave an unusual description of this creature, with the appearance of which no less mysterious things happened, worthy of the attention of ufologists.

Just before the appearance of the being, thunder was heard in the sky, then the inhabitants saw a bright halo of light and three bright objects.

“There was a crash, like thunder,” recalled Bolivian UFO researcher Javier Aliaga, who indicated that the object appeared to be “throwing fire.” Things took an even weirder turn when those on the scene saw some kind of entity exit the craft.

After that, the eyes of eyewitnesses saw that the creature itself was about one foot in height, with three fingers on each hand and huge expressive eyes, but many decided that this interstellar interloper, judging by its behavior, was blind. Perhaps the daylight was too bright for the cryptid.

The townspeople are sure that the alien creature is the legendary Chupacabra, which is very often met by local residents and from which farmers often suffer losses. Eyewitnesses say that the “Chupacabra” walked the streets of Santa Cruz, and then eventually vanished into the night and the craft that appeared to deliver it to Earth also disappeared.

Some researchers believe that cryptids like chupacabra or Bigfoot appear in our world from parallel dimensions, and return there. This case only adds to the mystery regarding the appearance of the Chupacabara.

Perhaps this creature arrived with representatives of alien civilizations, who sent the cryptid to Earth in the same way that people release their pets to walk in the fresh air or hunt local animals.

In general, researchers of the paranormal have even more mysteries.