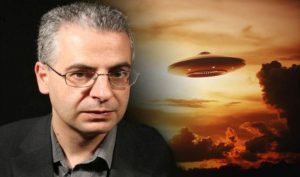 The retired UFO investigator for the Ministry of Defense states that UFOs are no longer a fringe subject, reports “New York Post”.

Pope, who analyzed numerous MoD UFO reports between 1985 and 2006, is surely no stranger to the topic and remains very open-minded about the possibility of extraterrestrials visitation.

In a recent article for the New York Post, Pope outlines why he believes that UFOs may have finally entered the mainstream, far from being the domain of fringe conspiracy theorists.

He specifically refers to the Advanced Aerospace Threat Identification Program (AATIP) — the Pentagon’s own UFO research initiative that ran from 2007 to 2012 in secret.

The program has been launched by the U.S. Senator Harry Reid-a vocal advocate of UFOs himself.

More recently, the revelation that several U.S. Navy pilots have observed unidentified objects flying at impossible speeds – coupled with the move by the U.S. Navy to standardize UFO reporting – appears to indicate that UFOs are something the U.S. government takes very seriously.

“It’s difficult to avoid the conclusion that there’s a bigger picture here,” Pope concludes. “The pace of events is picking up, and we seem to be building up to something.”