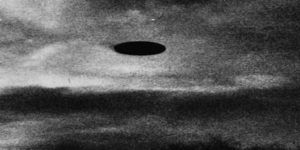 In July 1868, residents of Copiapó, Chile, observed an unidentified “aerial construction” fly overhead. It was described as having shiny scales and making a noise like a machine. A dramatic account from the summer of 1883 was published in the West German magazine, Der Stern.

According to the report, “All the children and the teacher in the public elementary school at Segeberg, saw in the sky two fiery balls, the size of full moons, traveling side by side, not very swiftly, from north to south, on a clear and sunny day.”

Despite the many sightings, most people still didn’t view UFOs as aliens from space. More popular explanations included angels, demons, or signs from God or the Devil. At this time, humans had still not learned how to fly, so the idea of space travel and life on other planets hadn’t entered the public consciousness.

It wouldn’t be until airplanes and rockets were invented in the early twentieth century that people began to seriously consider that UFOs might be creatures from other planets.

Then in 1896, the United States experienced its first UFO wave when residents across northern California reported seeing an “airship” in the sky. The first sighting to gain widespread attention occurred on November 17, 1896.

As reported in the Sacramento Bee: “Last evening between the hours of six and seven o’clock, in the year of our Lord 1896, a most startling exhibition was seen in the sky in this city of Sacramento.

People standing on the sidewalks at certain points in the city between the hours stated, saw coming through the sky over the housetops what appeared to them to be merely an electric arc lamp propelled by some mysterious force.

It came out of the east and sailed unevenly toward the southwest, dropping now nearer to the earth, and now suddenly rising into the air.” Several witnesses said they heard voices. Among the many witnesses was the daughter of the mayor of Sacramento.

Over the next week, the mysterious airship continued to appear. Five days later, on November 22, 1896, dozens of passengers on an Oakland streetcar observed an object that looked like a “wingless cigar.”

The object emitted beams of light and traveled slowly overhead. Again, the account became front-page news. Before long, the wave spread across the United States, with thousands of people reporting the strange zeppelin-like objects.

In 1897 there were many reported over Iowa, Minnesota, Nebraska, Wisconsin and Illinois. The first sightings started on the night of April 5th in Omaha , Nebraska with more than a 100 people witnessing the appearance of a flying object approximately 12 foot long , sperical in shape, shiny with a steel like body.

April 10th, further east, in Illinois, A Chicago newsstand dealer, Walter McCann, took a picture of one with his camera at Rogers Park. Here again , the 2 pictures revealed a elongated ovoid shape.

The same day in Mount Carroll, Illinois, more witnesses reported seeing the same type of object and again describing it as elongated and ovoid-shaped. The next night, in Minnesota, a cigar-shaped crafted was spotted by R.G. Adams over Minneapolis, Minnesota.

By April 12th, more reports had come in from Wisconsin. By April 14th, a cigar shaped craft was reported over Indiana. Continuing East, by the 19th, a similar type craft , described as approximately 180 feet long with red, white and green lights appeard in Cochransville, Ohio.

In a few of the cases, witnesses encountered human-looking people who were dressed strangely and spoke unknown languages. At first, people assumed that these airships were coming from foreign countries, such as Cuba. Again, the idea of aliens visiting Earth from outer space was still largely unknown.

Today, the mysterious airship wave remains unexplained. Some researchers believe that the sightings may have been the result of early undercover experiments with dirigibles, zeppelins, and other airships. And in fact, on November 3, 1897, timber merchant David Schwarz of the Austro-Hungarian Empire invented and successfully flew an airship.

Other researchers have a stranger explanation for the airship mystery. They say that UFOs are actually putting on different masks for each culture, and may actually be some sort of interdimensional visitors and not extraterrestrials at all.

The best evidence for this theory is the fact that UFOs do seem to appear different in each culture. For example, the many cases of fairies and elves in the medieval times may have been actual fairies and elves, actual aliens that people just thought were fairies or elves, or perhaps another mask worn by the interdimensional beings.