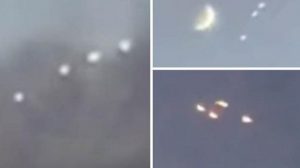 Residents of Cincinnati, USA, concerned about the strange phenomena which they had to observe.

One of the videos filmed by witnesses Leyna and Angie shows strange luminous balls floating in the air. Video show how several strange objects glide along the edge of the clouds. Then they suddenly disappear, as if dissolved, and appear again.

A similar phenomenon was captured by other Cincinnati residents. And this gave rise to a lot of rumors that they had a chance to observe UFOs.

Many commentators on the Internet have noted that it really looks like something alien.

“A lot of people think that these are paratroopers, but I saw how these strange light-balls go up or go down, and parachutists can’t do that”, – said one witness.

So what was that?