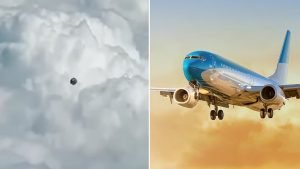 An Airbus A320 pilot, on a routine flight over Medellin, Colombia, looked out the cockpit window and spotted something he had never seen before in the clouds – a UFO. And now, many experts have agreed that the mysterious object filmed by an eyewitness is “real”.

The pilot quickly grabbed his phone and began filming the mysterious object, first pointing the camera at his altimeter, which shows he was flying at about 30,000 feet, and then pointing it out the window towards the clouds.

The pilot zoomed in and immediately saw a strange geometric metal object flying in a straight line in the opposite direction.

The Proof Is Out There on the History channel further examined the footage, after which it became definitely clear that the UFO looks like a polyhedron. Various video experts were then interviewed.

One researcher has suggested that the object’s diameter is between 10 and 15 feet, but its structure is unlike any flying object on Earth.

The aviation expert added that the object was moving too slowly to be a plane or a rocket, which implies that it does not look like a drone at all.

Against this backdrop, it has been suggested that it could be a solar orb, but this is highly unlikely as they do not “survive” at such a high altitude.

“I don’t have a good explanation,” the specialist said. Against this background, the interviewed experts classified the material as one of the “real UFOs”.

Commentators also agreed with the findings and suggested that the pilot was able to quickly zoom in on the object because he had already seen it, followed it, grabbed his phone, and knew where to shoot:

“Pilots are required to have excellent vision to fly. Some commercial pilots once were military fighter pilots and they needed to have ABOVE average vision. All pilots are supposed to scan the sky visually to avoid collisions. The object traveled slower than them so it stuck out visually. It isn’t surprising that he could spot it and then zoom in on it,” wrote one commentator.

Many believe that a UFO is a weather balloon sent to the planet to collect samples or conduct surveillance. It is also interesting to note that Navy FA-18 fighter pilots saw similar UFOs at 35,000 feet off the East Coast a few years ago.

The Department of Defense is still investigating what those objects were. Meanwhile, Medellin is no stranger to sightings. This South American city has witnessed so many events that it has been nicknamed the New Roswell.