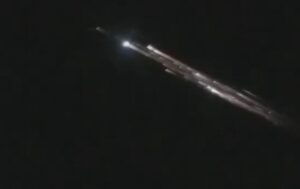 Yesterday, March 25 at 21.00, many residents of the American state of Washington witnessed the entry of an unknown space object into the dense layers of the earth’s atmosphere.

The fall of a large space object was accompanied by a fiery show of debris, which burned up when passing through dense layers of air.

The official authorities cannot yet explain what fell from space and collapsed in the atmosphere over Washington.

If this is space debris and a spacecraft entered the atmosphere, then its de-orbiting was uncontrollable.

In addition, the official authorities and NASA did not warn the population of the state about the impending fall of this large object, which means that the US space defense command did not know about its deorbiting and fall in Washington state.

So what fell from the sky?