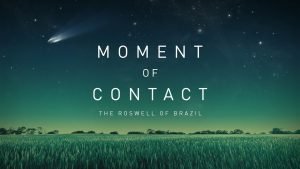 Two years ago, io9 premiered the trailer for The Phenomenon, a UFO documentary built around the “unavoidable fact” that aliens are real.

Now filmmaker James Fox is back with a follow-up that explores that anti-skeptical thesis through a more international lens, delving into “the Roswell of Brazil.” It’s called Moment of Contact, and io9 is once again excited to premiere the trailer, reports gizmodo.com.

Here’s the official description of the doc: “Moment of Contact, director James Fox’s follow-up to the 2020 hit, The Phenomenon, is an exploration of extraterrestrial encounters centered on a series of events in 1996 when citizens of Varginha, Brazil, reported seeing a UFO crash and one or more strange creatures.

“Several locals, including a group of girls ranging in age from 14-21, had a close encounter with a being described as about four feet tall, with brown oily skin, a large head. and huge red eyes. The town of Varginha was cordoned off by military and emergency response teams and two creatures were captured.

Was it real, or a mass delusion, or a hoax, or something even more unexplainable to account for all those people who claim to have witnessed some part of these events? It’s up to the viewer to decide.

Moment of Contact arrives on digital October 18. Until then, keep watching the skies!