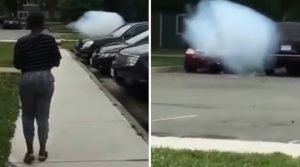 This strange “living” cloud was seen and photographed by the sisters Terra and Latoya Struggs from the city of Newman, Virginia (USA). The girls suddenly noticed how a very white cloud with sufficiently clear outlines float not far from them not very high above the sidewalk.

On the video (see below) you can hear the surprised exclamations of sisters and bystanders. They ask what it is, and then someone calls this object a “spy cloud”.

Also, someone behind the scenes suggests approaching and touching this cloud with hand, but in the end no one dares to do it.

A cloud, meanwhile, slowly crosses the road, flying past parked cars, then passes the sidewalk, and when it reaches another road, it starts to rise upwards.

The cloud does not stretch and diverge all the way, it remains as flat and dense in appearance as at the beginning.

Also, it is very smooth in appearance. Therefore, the version that it’s just someone from vaping enthusiasts created such a cloud does not hold water.

Or is it really just an object disguised as a cloud?