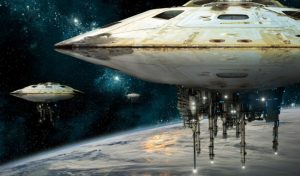 Have you ever seen something flying in the sky that you simply could not identify? Or perhaps you took a picture or video and found a speck of something that you just can’t explain.

If you have, don’t be alarmed. You’re part of a brotherhood of millions, and may join one of billions as UFO disclosure draws ever closer.

The Who’s Who Of UFO Sightings

From Dan Aykroyd to Larry King to Ronald Reagan to, in all probability, your neighbor John Doe, UFO spotters range from the average citizen to presidents. Each has their own story, and many will defend their sightings vehemently. But individual sightings don’t prove anything, even if a Ghostbuster himself says he saw one, and most people rarely take them seriously.

There are people who have dedicated their entire lives to finding UFOs, and a wealth of what some would consider “evidence” can be found all over the web. Simply typing “UFO” into YouTube will garner months of individually shot footage of what could be considered an unidentified flying object.

Can all of these people be wrong? No one knows, but some say that world leaders sure are acting strangely. That is, unless they know something we don’t.

The Vatican, Aliens, And A Missionary’s Fantasy

As reported in the Telegraph, an English News Agency, recently-uncovered documents indicate that Winston Churchill had intelligence relating to a UFO sighting but did not divulge said information for fear that it would disrupt the church.

Churchill thought that the existence of aliens would have people questioning their faith and therefore harming the credibility of the church. Whether his reasoning is true or not can be debated till the cows return from their abduction scenarios, but modern religious establishments may not necessarily agree.

In 2008, the Associated Press reported that the Vatican’s official position on extraterrestrial life is that believing in such existence does not contradict faith in God, and that it is okay for Catholics to do so.

Aliens would still be God’s creatures. More recently, it was reported by America Magazine that Brother Guy Consolmagno, a Jesuit astronomer who works at the Vatican observatory has said that he would have no problem baptizing aliens.

The Catholic Church is an extremely large institution with millions of followers that needs to maintain credibility in not only the eyes of its followers, but with the rest of the world as well.

The probability that they would allow information concerning their policies on extraterrestrials to just leak out, or that they would do so flippantly is low. If you’re a Dan Brown loyalist then you already believe the Vatican is keeping secrets from the rest of us, but you wont find Jesuits who want to baptize aliens in fiction alone any longer.

Aliens Wouldn’t Land On The White House Lawn, They’d Go To The UN

And nor would Donald Trump or any other U.S. President be the one to greet them. That honor will go to Malaysian astrophysicist, Mazlan Othman according to Wired.com. Currently she is the head of the UN’s Office for Outer Space Affairs (UNOOSA) and is expected to become the UN’s space ambassador to extraterrestrial life.

Don’t get too excited. The Guardian has reported that Othman herself has debunked such claims stating that while it would be “cool”, she has not been offered any such position. The UNOOSA has also denied any claim that such a position even exists. Too bad. Because that really would be a cool position, and it makes you wonder where such a rumor originated. Either way, Othman probably isn’t complaining. People actually know who she is now.

If The Government Knew About Aliens, They’d Tell Us, Right?

There has been so much information and misinformation spread about the subject of aliens and UFOs in this country that I wouldn’t put it past the government to have funded most of our Science Fiction television shows about these concepts just to create plausible deniability. Oh wait, that was an episode of Stargate SG-1.

You know who would know is the military, but they’d never say anything, which was true up until a few weeks ago. In September, seven former U.S. Air Force personnel came forward to tell their stories and experiences with UFOs.

CNN reports that these men offered detailed accounts of their time serving during the 60s, 70s, and 80s, where they either personally experienced or heard reports from other Air Force personnel who encountered UFOs over American nuclear missile silos.

These men acknowledge that UFOs are real, but aren’t the first to do so. Just tune in to Coast to Coast AM on one of your local AM channels in the dead of night and your almost sure to hear just such an account. All of these people cannot be crackpots or seeing things. UFO sightings can even be traced back thousands of years, but that’s another article.

The Real Question Should Be, What Do You Believe?

Believing in aliens or UFOs is moot. As of this moment, their existence or non-existence has yet to affect the world in any identifiable manner. If an alien goes Martha Stewart on the world and starts practicing insider trading, then their existence would mean something. You either believe or you don’t, and chances are that even if aliens do land on the White House lawn, some wont believe it.

But the evidence is hard to deny. Stephen Hawking has recently come out and said he basically guarantees the existence of aliens, although he wouldn’t recommend getting their attention.

NASA’s Keppler spacecraft has spotted an Earth-like planet, and has also discovered another that, as Discovery Magazine reports, rests within the essential Goldilocks Zone, an area of orbit around the sun that isn’t too warm or too cold to support life. It’s just right.

Neither guarantees extraterrestrial life, but it’s a step in the right direction, and if space were an ocean, we’ve barely mapped a grain of sand floating through the Gulf Stream. Many believe that there must be something out there.

Believe it or not, accept it or not, but the planet is being groomed for disclosure. Governments may not even know it yet, but many say that it’s only a matter of time.