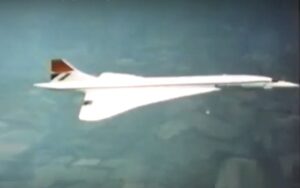 This 1976 footage was recorded by professional equipment from another aircraft that was escorting the Concorde.

You can often hear the question, “If UFOs appear so often, why are there no reliable videos on which they are captured?”.

As you can see – there is, but at that time, despite the hype in society, after the publication of this video, the authorities were not going to admit the fact of their existence and quickly fabricated an “authoritative opinion” from “respected specialists” who, without hesitation, announced this UFO – “glare”.

You can watch these footage for yourself and you don’t need to be a “professor” to see that when a UFO moves along the side of the plane, the reflection of its light can be seen on the windshield of the Concorde.

This proves that this is not a camera artifact, flare, or glare, but a real object actually located in three-dimensional space.

CCTV caught a huge triangular UFO flying over the houses