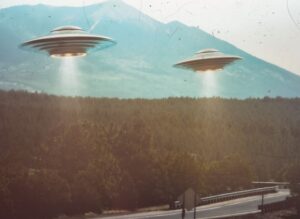 Congress decided to hold public hearings with the participation of representatives of American intelligence in order to deal with cases of UFO sightings.

The US government has taken seriously the cases of UFO sightings on Earth and wants to understand what these phenomena are and what their nature is.

Representatives of American intelligence were invited to the US Congress, who will soon have to testify that they know about it. This is the first meeting of its kind for the first time in over 50 years, Express reports.

“This meeting in Congress will give the public the opportunity to hear directly from experts in the field and intelligence officials about what is one of the greatest mysteries of our time.

“This hearing should break the vicious circle of excessive secrecy and speculation with the truth,” says Congressman Adam Schiff.

In 2021, Director of National Intelligence Avril Haynes released a report covering UFO sightings since 2004. This report states that 144 such cases have been documented. But only one of these UFO sightings could be explained by US Air Force pilots.

The US National Intelligence report says that there is a possibility that Russia or China could create some kind of cutting-edge technology. And this may explain the appearance of unidentified flying objects.

Moreover, these phenomena are definitely not related to the testing of US military equipment. The report also included descriptions of UFO sightings near US military training bases. Therefore, all these cases are attracting more and more attention of American politicians and the Pentagon.

Several years ago a special department was created in the Pentagon, whose task is to study cases of UFO sightings. Also, experts must find out whether it is really representatives of extraterrestrial intelligence that visit the Earth or whether these are secret developments of China or the Russian Federation.

But the work of this department turned out to be unsatisfactory, so the Pentagon created a new group of experts that will deal with the identification of unidentified objects.

“UFO sightings are a very important issue. We strive to be as open as possible to the American people,” said Pentagon spokesman John Kirby.