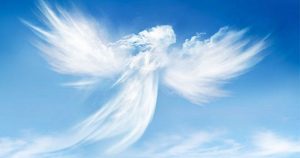 Angel is a word that is commonly applied to otherworldly beings found in religions and spiritual philosophies throughout the world. But ‘angel’ is more of a category than a specific being. There are actually different types of angels, depending on their nature and purpose for existing.

To understand each of the different angels, it helps to think of a major corporation, with the Divine Source (God, the Great Spirit) as CEO. It may be an amusing comparison, but it helps us grasp the complex hierarchy.

The highest level of angel is one most humans will never really know (until perhaps we’re deceased). Religious writings describe a certain class of angels as right-hand servants and protectors of the Divine Source.

They are like the personal assistants who would tend to any and all of our CEO’s personal needs. In the Bible, these types of angels are referred to as ‘seraphim’ and ‘cherubim’— those who work directly out of the ‘highest office’.

There is class of angels who tend to broader issues that the world faces. They are usually involved with responsibilities of the utmost important, such as world wars, world-changing prophecies and major shifts in consciousness.

They’re often found surrounding or in charge of political leaders or people who make decisions that affect a lot of others. They govern nature and deliver miracles.

These are the angels who may come and warn of an impending disaster to a local area, or may appear to help in the aftermath. They are present for births and deaths, escorting the souls back and forth between the Earth and the Heavens.

Known more commonly as archangels, they are a bit like those in charge of operations, working under the CEO and the board. They each have their areas of focus. However, instead of issues with world-wide impact, they seem to be more focused on more localized issues.

They are a direct mouthpiece for the CEO (messengers), but being of the ‘higher up’ levels they don’t usually get a chance to talk to everyone and anyone. More often they delegate responsibilities.

They’re concerned with delivering the most important messages to other angels and spirits, to prophets, psychics or, occasionally, regular ‘clients’ (people). Usually when an archangel steps up to take a case, it’s a special case that’s going to have a broad impact.

Occasionally, archangels may even be personal guardians—usually when the human involved is a central figure in an issue that’s going to affect a great many others.

You may know these types of angels by their most common name: guardian angels. Guardian angels are angels who are charged to guide and watch over a human for the duration of that person’s life. No one is born without at least one guardian angel ‘assigned’ to their case. These are generally the angels that work most directly with the public to represent the entire ‘businesses.

As mentioned above, occasionally, when a person’s life or situation will have a much broader national or international impact (either directly or indirectly), a higher class of angel might take on this role.

Have you ever heard the concept of a human ‘earning his wings’? This is when a human being who is spiritually evolved dies and takes his or her place among angels, to help them in the work they do. They are volunteers who want to spend their afterlife helping others— they work with guardian angels, and sometimes under orders of archangels.

While not actually angels, they’re often confused with angels because their radiant aura is white, so their spirits resemble angles (who are beings of light). A more appropriate term for such a person would be guardian spirit or spirit guide.