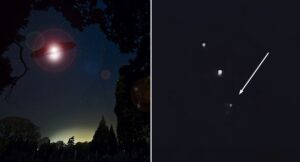 Sao Paulo is a colorful financial center of Brazil, one of the most populous cities in the world. On February 14, residents of the Brazilian city of São Paulo noticed two bright white UFOs in the night sky.

One of the eyewitnesses turned on the camera and used the zoom, after which he saw how one of the UFOs released another object surrounded by a strange haze.

Local air authorities reported that nothing unusual was observed on radars.

“One of the mysteries of ufology is there is a fluctuation in the number of reports over the years,” he told ABC News in a phone interview. “Some years it’s been low, but it’s gotten higher recently.”

In the sky, more and more phenomena are recorded that no one can explain. What is the reason, no one can answer.