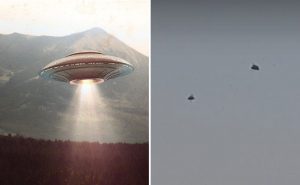 It all happened on November 14 within the city of Alma-Ata – the largest metropolis of Kazakhstan, located in the foothills of the Zailiyskiy Alatau.

There hasn’t been such a show for a long time, and the objects themselves are very unusual. At first, people saw in the sky two “clouds” around which some dots were spinning.

There were different versions – clouds, helicopters, drones, but the objects behaved in such a way that all these versions disappeared by themselves.

The two main objects circled in the sky and rotated slowly. Lots of small objects flew around them and then joined them, then moved between the first and second objects.

When one of the eyewitnesses began to film what was happening on the camera, then when zooming in, it became obvious that these were not clouds, not helicopters or drones. Objects – two main ones, represented a mass that absorbed smaller objects and, as a result, small objects were all absorbed (joined) to the two main ones.

Having absorbed all the small objects surrounding them, two main ones remained, which began to thicken and take on different shapes.

A little away from them and higher, the third is barely visible in the video, but compared to the two main ones, a small object that is kept at the same distance from them.

“It’s like in the War of the Worlds, do you remember the movie?” Another eyewitness asks the filmmaker and the operator confirms, “Yes, exactly, I remember.”

Then the UFOs began to slowly pick up speed and climb somewhere up. At the same time, eyewitnesses note that UFOs keep at the same distance from each other, and when one object is suspended, the second immediately stops. Both UFOs move in sync.

“I don’t like all this”, – the person filming what is happening thoughtfully says.

An eyewitness later said: “It was six o’clock in the evening. Objects are observed for about 15 minutes. At some point, they moved away and continued to hang. I never watched them again.”