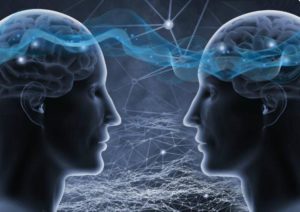 Is mental telepathy really true or is it just stuff you see in sci-fi flicks? According to a academic journal PLOS ONE, it looks like telepathy certainly is possible.

Earlier this year two professors got together to conduct what could be considered the experiment of a lifetime. Dr. Michel Berg from the University of Strasbourg in France got together with Dr. Alejandro Riera located in Kerala, India to see if mind-to-mind communication is real.

The two men sat in their respective locations, nearly 5,000 miles apart. Each then created a sensory vacuum by blindfolding themselves and blocking out any sounds. Then Dr. Reira put on a special skull cap called an encephalograph (EEG) to send out electrical impulses.

When Dr. Reira put out a thought, the EEG would send an impulse that could be translated into computer code and eventually letters. Both men took turns sending thought messages, which were received and translated. Although the exchange only consisted of “Hola” and “Ciao,” it was nonetheless monumental.

What Could it Mean for Humanity?

This small yet mighty experiment has plenty of implications for humanity. First of all, it shows that telepathy is possible—and over long distances.

But more than that, telepathy could be used in health and medical applications. Communication by thought could eventually help stroke victims or people in comas. Since they can’t verbally communicate, perhaps telepathy could help them tell others what they want.

Paraplegics or people with “locked in” syndrome could use their minds to speak or move artificial limbs. The possibilities are practically endless!

Despite the current scientific buzz, telepathy isn’t new. Human beings have been able to sense each other’s thoughts and feelings for eons. After all, how many times do mothers simply “know” when something bad has befallen their children thousands of miles away? And what about psychics who can read people’s minds? Heck, even you’ve probably experienced telepathy first hand when you predicted the other person at the end of a ringing phone.

It’s true telepathy isn’t new, but now that science is taking it seriously, perhaps we’ll learn new ways to use and enhance our abilities.

Science and Healing Through Astral Projection