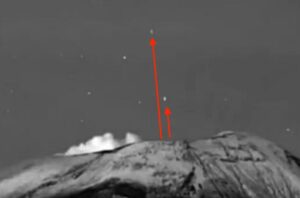 This live volcano cam caught two UFOs shooting out of the mouth of the famous Popocatepetl volcano this week.

Then a third UFO shoots across the top of the volcano, since this is an active volcano, we know it’s not a plane. No pilot in his right mind would fly over a volcano that blows twice a week.

“The close up of the video clearly shows the brightly glowing UFOs exiting the mouth and wavering back and forth and then shooting straight up! Absolutely mind-blowing!”, writes ufologist Scott C. Waring.

“This should be impossible, but I do know that UFOs have been seen entering and exiting this volcano for almost a decade. ”

“I also know there is an alien base 5-6km below the ground level that contains the alien base itself. 100% proof that aliens live on Earth and come and go any time they want”, Scott writes with confidence.

Popocatépetl is an active stratovolcano located in the states of Puebla, Morelos, and Mexico in central Mexico. It lies in the eastern half of the Trans-Mexican volcanic belt. It is the second highest peak in Mexico.

NASA is preparing to send a new message to aliens