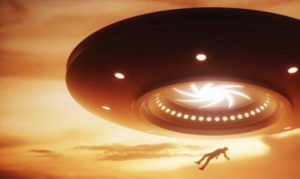 Several years before the famous alien abductions of Betty and Barney Hill, apparently, there’s also an abduction case by alien which occurred in 1953.

It all started on March 22, 1953, when two women named Jan Whitley and Sara Shaw (pseudonyms) were asleep in the same cabin in a remote location in Tujunga Canyon, California. Around 2 a.m., they both woke up because their cabin interior was illuminated by a mysterious bright, blue light.

They jumped up to investigate it, and then suddenly they lost their consciousness. When they woke up, two hours had passed and the strange blue light was already gone. Unfortunately, at the time, alien abductions were unheard of. Not knowing what happened, or whom to tell, they kept the event a secret for more than 20 years.

In 1975, Jan Whitley and Sara Shaw went to the NICAP UFO investigation, where they told their experience with the mysterious light. They had finally decided to tell their story, because abductions and missing time experiences had begun to appear in the media.

Under hypnosis, Sara recalled thin humanoid creatures in black garments who came into their room through a closed window and took them to a Saturn-shaped UFO hovering outside.

Sara described her experience: “I’m on the beam of light. I’m standing on it and it’s angled… it’s about the same angle as an escalator would be, except it doesn’t have ridges or steps. It’s just a very smooth, solid beam, and you just kind of stand in it.”

Shaw described one of the entities as being “not ugly to look at, or funny-looking, but they’re kind of funny in a way… his head is elongated. “It’s like an egg, but one that isn’t really wider at the top or the bottom.”

She noticed that the entities were basically humanoid—tall and thin with large hairless heads. Said Sara, “If there’s any hair, it’s underneath this skin-tight–it’s like a ski mask, but it’s almost a part of the skin.”

Once inside the craft, they were examined and then were returned from the craft on a beam of light.

While Sara’s friend, Jan was also floated out of the cabin, but unlike Sara, she fought against the abduction. That’s why she was never able to see beings. They were invisible to her, although she could feel their presence and was terrified. Sara’s examination was performed by male entities, while female entities stood behind and watched. She was then given a tour of the ship.

“The inside of the ship is like one giant room, and there’s a second level above us. It has circular balconies… the balcony goes all the way around the entire inside.”

The craft was very clean and brightly lit. The entities didn’t speak but communicated telepathically. The two women were taken to separate rooms, laid out on tables, and given a thorough medical examination.

The aliens seemed particularly interested in an old surgical scar on Jan Whitley’s body. They told the women not to be afraid, that they wouldn’t hurt them. The E.T.s said that they had the ability to cure cancer, and that finally, they would meet again.

Afterwards, they were returned to their cabin with no conscious memory of the event. Later on, one of them would experience further abductions.

In 1956, Jan Whitley and her friend named Emily Cronin had another strange experience involving UFO. One night as they were driving to their home in Tujunga with Emily’s young son in the back seat asleep, they pulled off into a rest stop.

They decided to sleep there for a time due to the late hour and because of heavy truck traffic on the highway. At some point, they were awakened by a bright light and found themselves paralyzed, unable to move. After several long minutes, Emily managed to move one finger, which seemed to break the paralysis for both. They turned and drove back down the mountain to a cafe to regain their composure.

Under hypnosis in 1975, Emily recalled two tall, thin entities clad in black who emerged from a bright craft that hovered nearby and circled around the car. They seemed particularly interested in Emilys son, asleep in the back seat.

The third entity then seemed to call the two to return to the craft. The craft took off at about the same time that Emily broke her paralysis. Once again, Jan had not seen the beings, although she awoke and felt the paralysis and saw the light, Later, Emily would be harassed by small white entities that wanted her to accompany them to an unknown place.

The case shocked the UFO community. At that point in time, only a few other cases were known. The idea that people could go inside UFOs was shocking, even to UFO investigators, and the idea that abductees would not even remember the experience was unthinkable.

By far the strangest aspect of UFOs are close encounters of the fourth kind, or cases in which people claim to have been taken onboard an alien craft. In some cases, people are only able to remember their encounter with the aid of hypnosis.

In other cases, hypnosis is not necessary. It’s important to remember that the UFO phenomenon is still a mystery. While the main theory is that UFO occupants are extraterrestrials from other planets, that is not the only theory.

Some UFO investigators believe that UFOs are interdimensional rather than extraterrestrial. They point out that UFOs can move at right angles and appear or disappear out of thin air.

It is also possible that UFOs come not from outer space, but from the inner-earth, and that they, like humans, have evolved on this planet. Some abductees have even been told by the ETs that they are actually time travelers from the future.

As written in An Introduction to the Psychology of Paranormal Belief and Experience By Tony Jinks and Mysteries, Legends, and Unexplained Phenomena: “UFOs and Aliens” by Preston Dennett