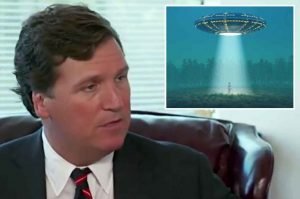 In an interview with British journalist Nick Pope, Carlson reported that he had been told by a “knowledgeable” source that the U.S. government had physical evidence that alien spacecraft landed on Earth — or at least crashed.

“I’ve heard this from someone who I think is knowledgeable on the subject that there is physical evidence that the U.S. government is holding, um, that, you know, would tell us a lot more – about what these objects are,” Carlson told Pope on the program, as seen in the video excerpt below on this article.

Pope then asked Carlson if he was referring to UFO “wreckage.”

“That is correct,” Tucker told the Ancient Aliens interviewer.

Have a look at the following video for more information.

A mysterious heartbeat-like radio burst has been detected in space