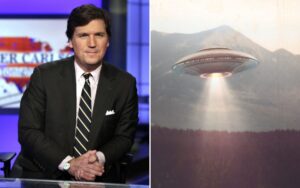 TV presenter Tucker Carlson ridiculed the inability of the United States to deal with UFOs. According to him, over the past 75 years, the US military has collected data on a startling number of mysterious air phenomena, most of which were definitely not weather balloons, reports Fox News.

“Unexplained flying objects buzzed over US military bases, missile bases, ships, planes and submarines, often at speeds and directions that seem to defy any known human technology,” the journalist notes.

According to Carlson, the Pentagon said practically nothing about it publicly and instead hid it constantly.

“Pretty much everything we know about UFOs comes from informants. By the time this show started almost five years ago, it was clear that something very strange was definitely going on in the skies above us,” he says.

The TV presenter claims that the question was what exactly they are. Over the years, he said, several influential political figures in Washington, including Senator Harry Reid of Nevada, have pushed the US military to reveal what they know about UFOs. However, they were unable to find out this information.

In 2020, Florida-based Senator Marco Rubio included the transparency requirement in a federal appropriation bill. As a result, by the end of June 2021, the government had to completely revise its UFO assessment. This report came out late Friday night. However, he still did not open the veil of secrecy, as the journalist notes.

“Today’s report analyzed 144 individual UFO sightings by the US military. But there was only one case that the government could explain what it was. It was a quote:” a large deflating balloon. “The other 143 remain a complete and utter mystery,” says Tucker Carlson.

He also notes with irony that the most sophisticated military in the world have no idea what it is and even how objects move from place to place.

Some of them, the report says, “appeared to remain stationary in the air, moving against the wind, maneuvering sharply, or moving at considerable speed with no visible means of propulsion.”

Carlson notes that the report says nothing, it only describes the obvious. The report only asserts that UFOs “are clearly a safety problem and may pose a threat to US national security.”

“So we know that no government in the world has anything like this. As far as we know, no technology exists. The Pentagon seems pretty sure they are not Russians or Chinese. So what is it?” – the journalist asks.