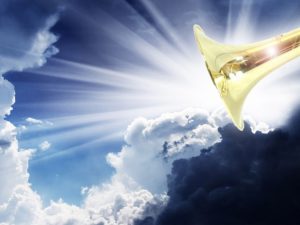 Unusual trumpet sounds continue around the world and they have reached a whole new tonal scale. In recent years, thousands of people in different countries have witnessed an inexplicable sound phenomenon. Loud sounds of unknown origin are heard from the sky all over the world.

Trumpet sounds from the sky are compared with the roar, rumble, creaking of metal, the noise of a jet engine, a high-speed train, giant speakers from which the sky “phons”.

Unusual very low sounds have been recorded by many people in different parts of the world since the summer of 2011. Many call them “sounds of the Apocalypse”.

These strange, sometimes frightening sounds from the sky not only became more frequent, but also switched to a completely new tonal scale.

As it turned out, a lot has changed in these sounds during the pandemic: the frequency of observations has increased, the very nature of the tones has changed. So, some of the new sounds resemble the sounds of opening some hellish gates or the roar of animals contained in this hell.

What these changes are connected with, one can only build theories. Some tend to mystify these sounds, which supposedly indicate the approach of the Day of Judgment. According to geophysicists, the causes that generate these waves can be located both in the core of the Earth and on the Sun.

Scientists believe that the source of such powerful and large-scale manifestations of acoustic-gravity waves should be very large-scale energy processes. Such processes include powerful solar flares and the giant energy flows generated by them, rushing to the Earth’s surface and destabilizing the magnetosphere, ionosphere and upper atmosphere.

So, the consequences of powerful solar flares – the impact of shock waves in the solar wind, flows of corpuscles and bursts of electromagnetic radiation – are the main reasons for the emergence of acoustic-gravity waves caused by an increase in solar activity. The reason for the “roar of heaven” may also lie in the core of the Earth.

Activation of energy processes in the Earth’s core can modulate the geomagnetic field. Which, through a chain of physical processes at the level of the ionosphere-atmosphere boundary, generates acoustic-gravity waves.

The audible range of which is fixed by people in the form of a frightening low-frequency sound in different parts of our planet.

In both cases, the causes that generate acoustic-gravity waves, although they have a completely understandable geophysical nature.

They testify to the expected significant increase in solar activity and geodynamic activity of our planet. The processes in the core, of course, regulate the internal energy of the Earth.

Where will all this lead?

A huge number of people see these strange sounds as alien activity. Others are the activities of the military, who are digging up something. They believe the “hum” is a side effect of US population control experiments. According to them, the CIA uses low-frequency emitters to “reprogram people’s behavior.”

Renowned conspiracy theorist Chuck Zuowsky says the “buzz” seen since the 90s in the city of Taos, New Mexico. It is the result of work on the construction of a secret underground base. Which people are building together with aliens.

Underground work is really underway – there are incredibly many reports about them. Since the sound is very weak, more like a vibration, and few people manage to record it. There were much more “booms”, that is, peculiar explosions in the sky.

Many also believe that the HAARP ionospheric research system is the culprit. Which is one of the main figures in a large number of other conspiracy theories.

The earth has not yet collided with the celestial axis, the planet has not turned over. But at the same time, with the onset of the pandemic, cases of UFO sightings have become more frequent. Many believe that these UFOs and seismology are somehow definitely connected. So, during the recent eruption of Etna, the following was observed:

And there are many such observations. If you look at one or another active volcano for a long time, you can see that small UFOs appear there. Therefore, UFOs and geological activity are somehow interconnected.

This means that strange sounds in the sky and underground forces are somehow connected with these continuous humming tones.

But no one knows where all this will lead. Although, most likely, such disturbing sounds do not bode well for the world and people. Some do not even rule out that some huge creatures will either crawl out of the ground soon. Or break through the ice sheet in Antarctica.

Of course, this is all just speculation, but so far no one has been able to answer where this phenomenon comes from.