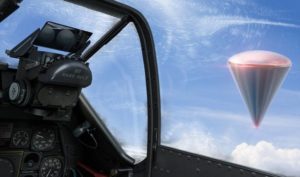 The final flight of Captain Thomas F. Mantell Jr. is considered by some researchers as the first human death attributed to a UFO. On January 7, 1948, Kentucky Air National Guard Captain Mantell was piloting an F-51 (like the one pictured above, a postwar version of the famed P-51D Mustang) to Standiford Air Force Base, Kentucky, along with three other National Guard planes. Around 1:30 P.M. Kentucky State Police were flooded with reports from citizens of a large, circular object flying erratically over Mansville, Kentucky.

Soon after similar reports came from Irvington and Owensboro. It was then reported visually from the control tower of Godman Air Force Base. The object was described as a huge, metallic sphere, with a red and white light on the bottom, and moving in a generally southward direction. Around 2:40 P.M. Captain Mantells flight was asked to investigate. One pilot was low on fuel and asked to continue his flight to the base, and was granted permission. Meanwhile Captain Mantell and the other two planes began climbing in the direction of the UFO in an attempt to intercept it.

With Mantell in the lead, the three F-51s soon reached 15,000 feet at which point Mantell radioed in, ” The object is directly ahead and above me now, moving at about half of my speed………It appears to be a metallic object……sun reflecting off of it, and it is of tremendous size…….I’m still climbing…….I’m trying to close in for a better look.”

Reaching 22 thousand feet, Mantells two escorts turned back, as the post war fighter planes had not been equiped with oxygen. Captain Mantell continued onward, leveled off at 30,000 feet and plunged into a spiral dive where it crashed on the farm of William J. Phillips, near Franklin, Kentucky, apparently because Captain Mantell had passed out from a lack of oxygen. According to the official accident report, Captain Mantells body was still strapped in the wreckage, and his watch had stopped at 3:18 P.M.

By 3:50 P.M. the UFO was no longer visible from Godman, although reports of it continued to come in from areas further south all the way into Tennessee. The cause of Captain Mantells death induced immediate controversy. The New York Times carried the headlines “ Flier Dies Chasing a ‘Flying Saucer’ ” and ” Plane Explodes over Kentucky as That and Near States Report Strange Object“. Speculation ended with the Air Force’s announcement that the fighters were simply chasing Venus and that Captain Mantell crashed due to anoxia (oxygen deprivation).

However a witness sited by the newspaper stated that he saw the plane explode. Glen Mays, who lived near Franklin said “ The plane circled three times like the pilot didnt know where he was going, and then started into a dive from about 20,000 feet. About halfway down there was a terrific explosion“. To add doubt to the Air Forces almost laughable explanation of the planes chasing Venus, were comments made by Godman base commander Guy F. Hix, who told reporters he observed the “flying saucer” for almost an hour.

Richard T. Miller was stationed at Scott Air Force Base in Belleville, Illinois and said he was in the operations room during the time of the chase. Miller claims that the last transmission made by Captain Mantell were ” My God! I see people in this thing!” Miller went on to state that investigators had concluded Captain Mantell died “ pursuing an intelligently controlled unidentified flying object“.

Soon afterwards, Air Technical Intelligence Center officers from Wright – Patterson AFB showed up and ordered all personnel to hand over all materials relating to the crash. “ Then after we had turned it over to them, they said they had already completed the investigation. I was no longer a skeptic. I had been up until that time. Now I wondered why the government had gone to all the trouble of covering it up, to keep it away from the press and the public.”

Supporting Millers claims of the details surrounding Captain Mantells death is the testimony of Captain James F. Duesler, today living in England. Duesler says he is one of several military observers who saw the UFO hovering over Godman Field in 1948. A pilot and a crash investigator, he described the object as a “strange gray looking object” that looked like a rotating inverted ice cream cone.

Duesler visited the crash site shortly after Mantells body had been removed, and says he was intrigued by the wreckage.

“The wings and tail section had broken off upon impact with the ground and were a short distance away from the plane. There was no damage to the surrounding trees and it was obvious there had been no forward or sideways motion when the plane came down. it appeared to have just ‘belly flopped’ into the clearing.

There was very little damage to the fuselage, which was in one piece, and no signs of blood whatsoever in the cockpit. There was no scratching on the body of the fuselage to indicate any forward movement and the propeller blade bore no tell – tale scratch marks to indicate it had been rotating at the time of impact, and one blade had been embedded into the ground. The damage pattern was not consistent with an aircraft of this type crashing at high speed into the ground.

Because of the large engine in the front of the plane, it should have come down nose first and hit the ground at an angle. Even if it had managed to glide in it would have cut a swath through the trees and left a channel in the ground. None of these signs were present. All indications were that it had just belly flopped into the clearing. I must admit, I found this very strange.

The official report of the Mantell incident contained a “certified” statement by crash investigator Duesler. However, Duesler says he never made such a statement and that the one that was presented as being made by him in the report was a “fake”.

While it appears Captain Mantell did indeed pass out and crash due to a lack of oxygen, the question of what he was chasing and the circumstances surrounding his crash remain open. The media was satisfied for a while with the official explanation that Captain Mantell, a World War II combat pilot veteran, was climbing past safe limits chasing the planet Venus. But soon after the incident, UFO researchers were able to show that the planet Venus was only 33 degrees above the horizon, and at only 1/2 its maximum brightness.

So not only was it not “above” him as the Air Force claimed, it was barely visible at that time of the day. Suddenly, the Air Force retracted its statement, and claimed that Captain Mantell was chasing a balloon, although they were unable to locate any records of a balloon being launched at that time. The whole story reminds me of one of those cartoons where all mayhem is breaking loose and the police officer is standing there telling the crowd of gawkers “Move along, nothing to see here.”

Can Extraterrestrials Communicate Through Electronic Equipment?