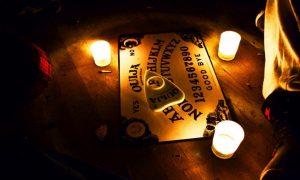 First off, this is very long but it really happened and still does happen. Secondly, all the names have been changed since I am not the only one involved. Thirdly, I have to give some background information or it might be hard to understand. And lastly, if you or anyone else have/has any ideas on how to help, please let me know.

Ok, here is the background info: My friend, “Amy”, was best friends with a girl named “Cathy”. They had been friends for many, many yeas so when Cathy started getting into satanic stuff Amy didn’t drop her. (It would have been hard to, Cathy was very jealous about Amy having other friends.) Anyway they would joke around, or so Amy thought, about killing themselves together. That is important to know for later. Eventually Cathy did kill herself (on Samhain) by running two cars in the closed garage. She left Amy an Ouija board that she said she cursed to bring her back after she died. Of course, Amy used it because she missed her friend. Now, on to her part of the story. (We’ll get to mine in part 2.)

Ever since using the Ouija board Amy has been awakened every night for the five years since Cathy’s death by a tapping that starts out in the far upper corner of the room and gets faster as it works it’s way along the wall/ceiling towards the head of her bed. Once it gets to that corner Cathy kind of rises out of the floor and sits on nothing. She then leans closer and closer to Amy’s face until they are almost touching noses. She never says anything, only laughs a low, evil laugh. Amy describes it as a “hee, hee, hee” type of laugh. That is all that happens on a good night. On a bad night, though, Cathy grabs Amy’s arm and starts to pull her out of the room towards the garage.

Her husband, who doesn’t believe in the paranormal, has even seen her two times. Also, the dogs they have won’t go into the laundry room (which shares the wall that the tapping starts on). And the cat always has “accidents” in her bedroom but nowhere else in the house. (I’m not sure of that matters, but it might.)

One thing I forgot to mention before was that no matter where Amy goes, Cathy follows. It even happened on her honeymoon in another country.

On to my part now. First, I’ll tell you the little weird things that have happened, then on to “the event”. Remember when I mentioned that Cathy was jealous of Amy having other friends? Well, she still is. Every time I talk to Amy things I gave her fall or break. The same goes for things she gave me.

I think I am what you would call slightly sensitive. I saw what I called angels on my dresser when I was little, can feel if something bad has happened where I’m at, and can sometimes see things that are there with my mind rather than my eyes. That last bit is hard to explain, but you may understand a little later. Also, I know things sometimes. Amy had given me a pair of boots she said she out grew. I was wearing them one day and all I could think was, “These are the dead girls boots.” When I told my friend she told me that they had belonged to Cathy. There are lots of little things like that. Anyway, when I would go to her house, even before I knew about Cathy, I hated having to go to the bathroom because you have to go through the laundry room. I always got really scared for no reason. It was so bad I’d wait until I was ready to burst before I’d go and I’d still have to force myself.

Here is the part about seeing without my eyes. After Amy told me what was happening I knew what Cathy looked like without having been told. I described her to Amy who told me I was exactly right. I would later see just how right I was.

I decided I wanted to help her so I went to her house. Before we got started I did a tarot reading on Amy. It kept coming out extremely bad and didn’t make any sense. (Interesting sidenote: Ever since that day when I tried to use that deck it always came out like that, though my new deck is quite accurate.)

During that whole time the tapping was going on but very quietly and it stayed in that one corner. After we gave up Amy decided she wanted me to see Cathy first hand if I could. She said she always came when she asked her to. So we turned out all the lights, and waited. Soon the tapping began along the wall. It was very odd when Cathy started to rise out of the floor. I don’t think she wanted me to see her because she would come up a little (you could just see her hair and the blanket billowing out a little) and the room would get even darker somehow but she would soon slip back down and it would be the normal darkness of night. She did this about three times before she finally came about halfway up.

Before she could get any farther I hightailed it out of there. It was the most frightening thing I’d ever seen. She wore all black, had waist length darker than coal black hair, and her skin was whiter than anything I’d ever seen, but dim and dark somehow. The worst were her eyes. They were extremely black and so full of hate and anger. I freak out just writing this. After a few hours we sealed a box of the things Cathy had given to her and created a candle of protection with runes. That hasn’t helped much.

She still visits Amy, only now I know she has been around my home, too. I can feel her in another room sometimes. When I go in there she is gone, but I can smell patchouli, her favorite incense.