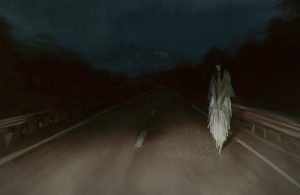 A guy I worked with told me this story, he swore it was true. Written as told to me, by Peter Petrisko.

I was driving up towards Prescott, AZ, my girlfriend, Becky, dozing off in the seat next to me. Rolling the window partially down, in the hopes the cool air would keep me alert, I wearily kept driving my Chevy down this narrow highway road, with nothing but a thick forested area on the passenger side of me, and mostly open meadow land, with a few clumps of trees here and there, along the driver’s side of the road.

I had wanted to leave first thing in the morning on Friday, but Becky was called into work at the last minute, so we ended up leaving at close to eight o’clock that night. Knowing we had to head back before early Monday, I didn’t want to wait until the next day to go and end up losing a good chunk of a Saturday to boot.

So here I was, it had to be close to at least 10 o’clock by then, driving by the light of my dim headlights, with a close to full moon overhead (full enough to see the open expanses of the passing meadow areas, anyway) when I noticed some smoke or steam coming up from the sides of my car hood.

This, in and of itself, was not unusual as the car was close to fifteen years old, dented up a bit, with dimmer than usual lights and hoses that seemed to know the most inopportune time to break. Add to that, a radiator that overheated during the summer months or when in use for long periods of time.

This being early October, I hadn’t given the radiator much thought – it hadn’t bothered to act up since August, and as the saying goes ‘out of sight, out of mind’. But something sure was putting off plumes under the hood, so I nudged Becky and explained in short that I had to pull over.

As I slowed down a bit, Becky rolled down her window and peered out along the edges of the dark wall of pine trees.

“Up there,” she exclaimed, pointing forward, “about twenty feet or so there’s a dirt shoulder of some kind.”

Slowing to a crawl, feeling safe at the moment as another car hadn’t passed us for a number of miles now, I quickly saw the flat, dirt indent, about the length and width of two cars, just to the right of the road. The dirt area, much like that whole side of the road, was lined by a knotted mass of trees, giving it the look of a half circle cut down the middle by the road. I pulled over, and turned the car off – leaving the keys hanging from the ignition.

With the headlights on, I got out of the car and walked to the front of it, popping the hood. I had grabbed a flashlight out of the glovebox, and so proceeded to inspect the damage. Sure enough, the radiator had overheated.

I bent down a little, to peek between the crack of the hood’s bottom edge and the top of the car front, to look at Becky through the front windshield. I was going to call out, to ask her to grab the gallon bottle of water I kept behind the front seat (there since August, at least) so, once it cooled a bit, I could add water to the radiator.

Expecting to see her dozing off, or looking toward me, I was surprised to see her staring wide-eyed, mouth agape, out the direction of the driver’s side window. She was as white as a ghost.

“What are you doing?” I demanded to know. She kept staring out at the meadowed fields, only raising her arm slightly to point in the direction she was looking.

“What?” I said, walking back towards the driver’s door.

As I did, I looked out into the moonlit meadow. I saw a short line of trees in the distant background, a small pine about 20-25 ft out, directly in line with the back end of the car, and, running about ten feet from that point forward, in a line almost parallel with the road, was a short brick wall, about three feet or so high.

A sparse forested area began, about forty feet or so from the wall’s edges, in either direction of the small meadow.

“So?” I said, “Probably part of an old house, or a fence. What’s the big deal about the wall?”

As I got into the car, and shut the door to wait for the innards to cool, she replied – slowly, quietly – “It isn’t the brick wall. It’s what I saw looking at us OVER the top of the wall.”

I turned to her, “What? Quit screwing around.”

I turned to look.

I saw a small translucent-white stocky humanoid form, just shy of three feet tall, its tiny round eyes from this distance appearing as black as night, standing in front of the wall. It slowly took a step or two towards us, its short chubby arms at its side.

I screamed, and tried to turn on the flashlight. I knew the batteries were low, and sometimes had to jiggle it and turn the cap slightly to get it to work, so in my excitement I twisted the cap, the batteries flew out and I about dirtied by pants. As the batteries were now rolling under the seat and across the floor of the car, I decided to forget that.

I looked up, saw the hood was still up, and froze.

“He’s going back,” Becky then said.

I looked out over the moonlit field again, just in time to see this…thing… scamper around the side of the wall, out of view.

As Becky quickly rolled up her car window, I said I was going to shut the hood – to hell with the water, if the radiator didn’t burn out we’d stop down the road and add water.

“Give me the bottle. I’ll dump some in the reservoir and shut the hood, you just start the car.” Becky replied.

As she got out and went to the front, I turned the key. The engine groaned, trying to turn over. I looked from the steering wheel, to Becky pouring some water into the reservoir, to the wall, and back again.

As Becky slammed the hood shut, I looked towards the wall – to see the small, white head of the ghostly entity peering over the top of it.

“Get in the car!” I yelled, as the entity’s tiny hands gripped the top of the wall, and it hoisted itself clean over – landing on its feet, running.

Becky jumped in the passenger side, locking her door. She no longer had the bottle, which couldn’t have been more than half empty now, but, under the circumstances, I didn’t ask and I didn’t care.

I turned the key, still it wouldn’t catch.

I didn’t want to look.

I turned the key again, still just that tired groan.

Becky leaned over, reaching past me, hitting my door lock with one hand while rolling the window up with the other (it was one of those older, manual window knob rollup jobs.)

“Hurry!” she said, frightened, as she sat back up.

With one more turn of the key, the car finally started, and as I punched the accelerator, I looked toward the field.

That little thing was only a few feet from the edge of the road – the edge on the OTHER side of the road, thankfully, but close enough that I could see its eyes were, indeed, dark, empty holes, its mouth was open now, in a wide leering grin, and I could have sworn it had small pointed teeth but it all happened so fast. Its skin, or surface, seemed to be roiling, as the entire entity ran at my car.

As we headed down the road, I turned my rearview mirror in such a way I could see “it” – quite a bit back now, turned away from us, walking alongside the road in the opposite direction.

I watched the road ahead.

Then, Becky screamed. He had been half turned, looking back at the entity too. Now, she was bent straight over, her head buried in her hands.

I turned my rearview mirror to and fro, but only saw the road – “it” was gone.

We drove another twenty minutes or so with the car smoking a small portion of the way. The car overheated again as we entered the outskirts of town, only then would Becky let me stop.

As we parked and waited at the first gas station we hit, I asked what had happened.

“I was watching it, it stopped at the edge of the road.” she answered.

“Yeah,” she answered “it was walking away. But as it walked away, its head turned all the way around, still grinning, and it watched us drive away.”

Needless to say, when we headed back we left at 10 AM, to be sure we’d get back LONG before nightfall.