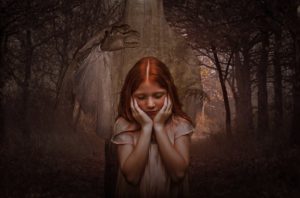 Robert Keyes moved his family to Princeton, Massachusetts in 1751, purchasing 200 acres of land on the South-Eastern slope of the Wachusett Mountain. Four years later on April 14th 1755, Martha Keyes had sent her eldest daughters, Patty and Anna, to collect sand from the banks of Wachusett Lake, a mile from their family’s home. Sand was a common scrubbing agent in those days. Younger sister Lucy Keyes, just four years and eight months old, attempted to follow her elder sisters to the lake and although she began her pursuit on the right trail, she never caught up with them and was never seen again.

The townspeople created search parties, and even drained the lake, but came up empty-handed. Lucy’s mother, Martha scoured the woods, calling for her. Night after night, she searched the woods. Her grief overwhelmed her, driving her to near insanity. She died in 1786 never knowing what happened to her daughter. Robert Keyes was driven to near poverty in his efforts to find daughter Lucy, selling portions of land and even petitioning the government for financial assistance in 1765.

There are a few theories as to what could have happened to little Lucy. The first of these centres around a mountainside neighbor of the Keyes family called Tilly Littlejohn. According to an 1827 written by Littlejohn which is now in possession of Cornell University, the letter is a deathbed confession to the brutal murder of the little girl whose father he had quarrelled with over property lines. When he spotted Lucy Keyes wandering in the woods all alone, he struck her head with a rock several times killing her, and then concealed her body in a hollow log and went home. He joined the search party but as the townspeople were thoroughly combing the woods, he began to fear that Lucy’s body may be discover.

Littlejohn retrieved her body and reburied it under a fallen tree, placing stones and dead leaves over it, and in a further attempt to conceal his crime built a fire over. In a further attempt to shift suspicion away from himself, he claimed to have seen some Indians in the area and suggested they may have taken little Lucy keyes. Lucy’s body was never found even after the discovery of the letter.

The second theory, regarded by many locals as the most probable, suggests that a nearby Native American tribe captured and fostered the lost little girl. Reports say that many years later, two travellers came across a white woman living among a tribe near the Canadian border who knew little to no English, but recalled once living near what she called “Chusett Hill”. Wachusett is classified as a mountain but looks more like a hill. It was never confirmed whether the girl was Lucy or not.

A third possibility is that a number of things could have happened to a young girl alone in the woods, Lucy was only four years old at the time of disappearance. She could have been attack by wild animals for instance, the only obvious problem with this theory is there was no trace of her found. If she was killed by animals there would be tracks, blood, pieces of her clothing, or something left behind for someone to find.

It is believed Lucy and her heartbroken mother Martha still haunt the area that they used to live on in Wachusett Mountain. To this day, locals claim to hear Martha calling for her daughter in the woods and report seeing unexplained child-sized footprints in the snow.

The story inspired the 2005 film, The Legend of Lucy Keyes.