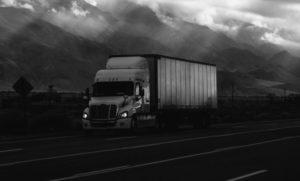 The life of a long-haul trucker is a difficult one. Long, tedious hours on the road, away from family for days or even weeks at a time. As Mike L. explains, they also witness many weird and incredible things on their interstate travels.

Yet Mike was not prepared for what he experienced one summer night at a tiny truck stop in the middle of nowhere… hardly the place where one would expect a ghost – if that’s what it was.

Here is what trucker Mike told on one forum:

I am an over-the-road truck driver and I drive across all of the lower-48 states. I see some unusual things from time to time, but nothing compares to what I encountered in Palestine, Arkansas in mid-June of 2011.

I was on a long haul from Detroit, Michigan to Houston, Texas. This was day three of my trip and I was beginning to run out of driving hours for the day. I noticed a truck stop/gas station on the side of I-40, pulled off and decided to call it a night. I was running ahead of schedule, so I was going to have myself a long, fourteen-hour break instead of the usual ten.

The middle of nowhere

Off the bat, I didn’t like the area, but had no other choice. The bathrooms were unkempt and had enough graffiti on the walls to classify itself as an inner-city truck stop, even though I was practically in the middle of nowhere. It was also a small stop, with parking for only a dozen trucks. After washing up, I purchased a new work knife, some hot food and headed out to my truck.

I sat in the captain’s chair and listened to the radio while I ate my dinner with the windows down, letting in the dry wind. The Mississippi River had just begun flooding, but there hadn’t been any rain in over a week. The surrounding area was beginning to look like Nevada more than Arkansas.

I finished my meal and cleaned up a bit. I slid out of the seat and onto the pavement as a gust of warm wind hit me. I strolled over to the dumpster, tossed my garbage inside and began slowly walking back to my truck. I fished out a filterless cigarette and leaned against the bug-splattered side of my truck and lit it with my lighter.

I enjoyed the smoke as I watched the sun set below the horizon. A few more trucks had backed into spots. I spotted one guy walking out of the store with a bottle of beer in his hand, looking around nervously as he quickly strode over to his truck. The life of a trucker. Something interesting and new every day. Risking his job over one, lousy beer.

I climbed back into the cab of the truck, dropped back into the sleeper berth, changed into a pair of pajamas and lay down to get some rest. I didn’t bother setting an alarm. I felt sleep creep over me and accepted it as I drifted off into dreamworld.

I awoke with the cab of the truck rocking violently, knocking the bottle of water I had placed on my “nightstand” over onto the floor. I sat straight up, fully awake and pressed the button on the truck’s radio/alarm. It was shortly after three in the morning.

I reached down and grabbed the bottle of water that had fallen, twisted the cap off and took a few deep gulps before wondering what had rocked my truck so violently. Then I remembered: the wind.

I settled back down, got my heart rate back below a hundred and lay my head down on the pillow. The truck rocked again, knocking my ashtray over that I had set in the cup holder and once again tossing my water bottle onto the floor.

I flipped on the overhead light, slid on my shoes and grabbed another cigarette from my pack. I opened the curtains, sat in the captain’s chair and shut off the sleeper light. I opened the door and noticed that it had cooled down considerably. I shut off the truck, pocketed the keys and climbed down onto the pavement to look around.

At this time of night, the truck stop only had lights around the gasoline pumps, and their light could not reach the truck parking area. I looked around a moment, lit my cigarette… and then noticed something. The wind had stopped blowing.

I wondered what had caused my truck to rock so violently. Earthquake maybe? I knew that a few had been reported around Memphis, and I was probably close enough to have felt a tremor, but that rocking motion did not feel like an earthquake. It felt like the wind hitting the side of my truck with a strong gust.

Curiously and cautiously, I walked around the front of my truck to the passenger side and looked down the length of my trailer. I noticed movement. Low to the ground, about four feet. Not fast. I used my keys to unlock the passenger-side door, jumped up and grabbed my large flashlight from an overhead storage compartment. I climbed back down and closed and locked the door.

I clicked on the light and shined it down the side of my trailer. There was a young girl standing off into the field about ten feet behind my truck, but when I looked harder, she wasn’t there.

Well, like I said earlier, truck drivers see something new every day. This was certainly new. I began to walk toward the rear of my truck, scanning the field with my flashlight for any trace of the girl I had just seen.

When I reached the back, there was no trace. It must have been a trick of the eyes. Heck, I haven’t even fully awakened yet. I glanced over my shoulder. There were no cars at the pumps and the clerk definitely hadn’t noticed me.

I felt “the call of the wild” coming on and didn’t feel much like walking into the store wearing my pajamas. I was in the middle of nowhere and no one could see me, so I figured no harm, no foul. I stood at the rear of the trailer and did my business, looking around for that girl again (also hoping that she wasn’t hiding behind something and watching me do this).

I put everything away and walked to the driver’s side of my truck toward the cab. I took the last couple of puffs off my cigarette and flung it into the parking lot, used my keys to unlock the truck and popped the door open. Just as I planted my foot on the fairing, I heard a distinct giggle. A girl’s giggle. I stepped back down and shined the flashlight around. Nothing.

“This is getting kind of creepy,” I said aloud.

“He heard me,” a small girl’s voice answered back.

I jumped backward away from my truck. The voice had come from inside the cab! Something was wrong. I had the entire truck locked up while I was walking around. There was no way that someone could have gotten in without breaking a window. Steeling myself for what was going to be an uncomfortable encounter at the least, I took a step up on the fairing and leaned my head into the truck.

“Goodnight,” a soft voice said, which seemed to emanate from all around me. I flinched as I heard the word and felt a cold chill run through my body. I slid off the seat and stood up in the cab, bumping my temple off the overhead storage bins. I looked around the sleeper. No one was there.

I turned around and shuffled into the cab to close the door when I saw the young girl standing outside my truck on the pavement, looking up at me with lifeless eyes. Those eyes, you see, weren’t meant for a person. They were designed for a predator, and all of a sudden I felt like prey.

I reached forward and slammed the door shut and flicked the lock. I quickly decided that I was not staying here for the rest of the night. I turned the key and heard my truck’s motor rumble to life, along with the familiar, annoying buzzing that was my air-pressure gauge telling me that I didn’t have enough air to release the brakes.

I took a furtive glance out the window, and there she stood – still as a tree, looking up at me and smiling. I didn’t want to get any closer to the window until I was ready to get my truck moving. This was wrong, and I didn’t want any part of this.

That “girl” wasn’t human, at least not anymore she wasn’t. It was almost as if she was something so inhuman that it would take the form of a human. It’s hard for me to explain and I feel sick just thinking about it. I heard the siren shut off and hit the valves to supply air to my brake system. As the system began to air up, the siren came on again.

Screw this, I thought to myself. I have enough to get out of here. I disengaged the clutch, grinded the truck into gear and roared out of the parking lot like the devil himself was behind me… which, for all I knew, he was.

I looked in my side mirror as I was about to start turning right and saw the girl washed in the red and amber glow of my running lights. She was smiling at me and waving. I flew through my gears as quickly as they would let me as I got back onto the interstate.

The knife and the postcard

I drove for about forty-five minutes, repeatedly hitting the switch to turn on my interior lights to look around the cab and the sleeper before finally spotting a larger truck stop at the next exit. After backing into one of the few remaining spots left, I shut off my lights and turned on the sleeper berth light as I walked into the back. Then paused.

At the store, I had bought a souvenir. Nothing fancy, just a postcard with a picture of Arkansas on it. I also had bought a new knife. I had never even taken the knife out of the box, and remembered putting the postcard into a drawer for safekeeping.

It took me several minutes just to work the knife loose enough to withdraw it from the nightstand. Thankfully, when I turned the postcard over, no message had been left for me.

To this day I do not know what I saw. I hear other truckers talk of strange things that they see on the interstates, U.S. highways and state routes, but I’ve never mentioned my experience. I’ve always felt that just by mentioning her, I’d walk back out to my truck and there she would be, sitting on my bunk and waiting for me.

I threw that postcard away and tossed the knife into a dumpster. I got another postcard from Arkansas, just to keep the collection going. I’ve got 36 so far.