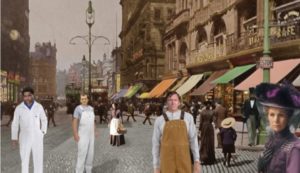 A woman named Sarah told me a very interesting story about her father, Mike Stafford, a Huyton joiner who was contracted to work on a shop on Hanover Street in the 1980s.

Mike was working at the shop in June 1988 when in walked two men he had gone to Riversdale Technical College with in his younger years – George Carroll and Harry Penlington (who also hailed from Huyton).

George and Harry had been hired to decorate the shop, which was due to open in a few days’ time, and on their lunch break the men went to get a bite to eat at a café on Church Street.

Harry said he knew a shortcut to the café, and he took the men down Brooks Alley, a very narrow passageway that runs off Hanover Street.

Mike Stafford said the alleyway did not lead onto Church Street – it led onto School Lane, near the Bluecoat Chambers, but Harry insisted it did lead to Church Street – and to Harry’s surprise, his old friend was right – but something ‘looked wrong’ about Church Street.

None of the well-known stores on that thoroughfare could be found; no Littlewoods or Burton the Tailors – and all of the people on the street were dressed in old-fashioned clothes.

“Told you it was a cracker short-cut, Mike”, said Harry, not fully aware about the local anomaly yet, until Mike and George pointed out all of the backdated people knocking about.

Mike said: “They must be filming something; they film Sherlock Holmes in Liverpool, don’t they?”

Mike was referring to the Granada Television TV series about the Victorian detective, starring Jeremy Brett, which had indeed used the streets of the Georgian Quarter and Croxteth Hall as period backdrops – but George said: “This would cost a fortune, Mike”, as he looked about.

There were trams coming down Church Street, and every single person they could see – as far as Lord Street in the west and Bold Street in the east – was wearing clothes that were obviously Victorian or Edwardian.

Harry became a bit uneasy, and seemed to regard the people as ghosts, and he said: “‘I don’t like this, let’s cut, come on”,’ and he backed away, intending to go back down that alleyway.

A sign on that alleyway said, ‘Old Post Office Place’ – and where shops like Dixons should have been, there was a post office. Mike was more intrigued than afraid, and he went walkabouts with George, much to the annoyance of Harry, who seemed petrified when a woman dressed in a black bonnet and long black dress brushed past him.

When Mike saw a church where Burtons should have been, he turned to George and casually remarked: “We’ve gone back in time; this isn’t a film set. I don’t know how, but we’ve gone back.”

Mike said to a passing well-dressed gentleman in a top hat, “Excuse me mate, what year is this?”

The man halted, looked Mike (who was wearing work overalls) up and down, then continued on his way, swinging a walking cane.

“Right, I’m going!” Harry announced, and trotted back towards the alleyway, Old Post Office Place. Mike said to George, “Let’s go back, get a camera and see if this is still here.”

As the joiner and the decorator then followed the ruffled Harry, a loud voice rang out, “Oi!”

Mike and George turned around and there was the well-to-do gent Mike had questioned a minute ago – standing next to a policeman. “Come here!” shouted the policeman, but knowing their story about walking from 1988 to God knows when would not be believed, Mike and George ran down the alleyway as fast as their legs could carry them, and they overtook Harry, who shouted, “What’s up?”

The three men found themselves on School Lane, next to the Old Post Office pub, and when they turned around they saw that the passageway to Church Street had gone – it was now the back of a store.

Long ago, in Victorian times, there was a passage there that led to Church Street, but the three men did not know this. Mike bought a camera and for months he walked down Brooks Alley and frequented Church Street in the hope of experiencing another time slip but he never did. He died in the 1990s.

Sarah, Mike’s daughter, said he often told the story of what he called a “timewarp” and said it had felt so real.

I have since traced Mike’s two friends and their accounts match his perfectly. I have a feeling the timeslip was somehow connected to the Bold Street Time Fault (as I call it) – an area of the city where there have been many inexplicable slips in time.

Time Travelers: Journeys into the Past and Future