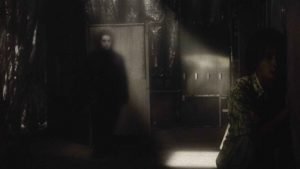 The city of Tucson is a reminder of old Arizona with building architecture influenced by Spain and Mexico standing among more modern structures. It’s said that ghosts reside in three sites in Tuscon, Arizona.

Carl Velasco’s ghost haunts his former home, wraith of a dark-haired lady is seen at the university and a spectral custodian is experienced at the high school…

The residence was built in the 1850s. Carl Ygnacio Velasco’s ghost haunts his former home. He was a Sonoran State Senator and Judge before he and his wife, Beatriz, moved into the house in 1878.

He published El Fronterizo, a Spanish newspaper in a room attached onto side of the Stone Avenue house that had his office and press. The paper was circulated throughout southern Arizona and northern Mexico until Velasco died in 1914.

After he died, the house was abandoned until it was turned into apartments, then neglected and was deteriorating until Charles Brown, Bill Dillon and William Cobb bought it and began extensive renovations.

Brown saw the head and shoulders of a Mexican man floating in the air in the bedroom behind where the old newspaper office was located shortly after the work began.

He identified the ghost as Carlos Velasco from an 1883 photograph of the man. He and a female companion saw the specter in a doorway. The phantom looked at them, then vanished.

Other witnesses reported seeing his apparition.

The specter of a dark-haired young woman haunts the university’s Modern Language Building. She wears a shawl and a long skirt from the early 1900s and looks into the romance language’s lab through a window. When people try to talk to her, she runs away, then vanishes.

According to legend, the woman was a murder victim in the early twentieth century. After she was killed, her body was thrown into a well near to what is now the women’s athletic field.

In 1965, the Modern Language Building was constructed on the site. Workers allegedly found human remains as they dug the foundation, but it’s said that the workers did not report the macabre discovery, as they feared an investigation would delay construction.

The ghost that’s said to haunt Catalina High School is believed to be that of beloved custodian Martin Valencia, who died in the 1970s.

He was vigilant in making sure that food in the kitchen and home economics classrooms weren’t filched by other school employees. The grateful cooks would leave treats and snacks for him, which Valencia shared with his colleagues.

One day, the custodian suffered a heart attack while he was working and died in the school. A few minutes after midnight in June 1980, a custodian saw a man in a hallway and heard a garbage container’s metal casters rolling down the hall.

He saw the figure of a man moving the container. The man entered a restroom. He assumed it was one of the other custodians until he found all of them in the gymnasium setting up chairs.

What are Tucson’s Ghosts?

Velasco and Valencia’s ghosts are apparitions. These intelligent specters can be seen and heard. Velasco looks directly at the witnesses. He rearranges furniture and resets clocks which are entity agent poltergeist activity, a manifestation of psychokinesis, PK, the ability of the mind to affect matter.

Apparitions have been known to become active when buildings are renovated. Velasco’s specter didn’t appear until the new owners had started working in the building.

Trash containers and cleaning supplies often disappear, then reappear in other places, lights mysteriously turn off when employees are working and doors slam shut. Many custodians suspect they’re targets of a prankster until they realize that the only explanation for these inexplicable incidents is the ghost.

The University of Arizona ghost appears to also be an apparition. She peeks through a window and, when addressed, flees, then vanishes. It appears that she is reacting to people.