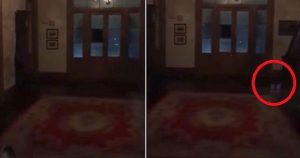 Spouses Brendan and Taryn Hunt recently visited one of the most famous American “haunted houses” – the mansion Myrtles Plantation in Louisiana.

When another tourist walked past them he was very scared. He said that he had just seen a ghostly spirit in the house.

After that, the couple turned on their phone and began to film the rooms inside the mansion. While they were filming (see the video below), they did not notice anything unusual in the house.

However, after they watched the video, they saw on it the “ghostly legs of three children”. In any case, something on the video is very similar to this.

“Legs” appear next to the stairs, as if ghost children had just descended from below, and then run off somewhere to the left.

According to the spouse, if you look closely, you can distinguish three pairs of children’s feet, dressed in white socks and shoes with buckles.

Two “children” quickly run past, but the third one is delayed for a couple of seconds and as if looking directly at the person who is filming.