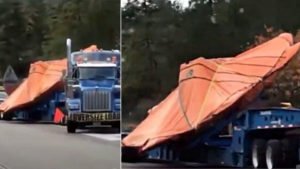 Near the American base “Area 51” eyewitnesses noticed an object that looked like a UFO, reports express.co.uk.

It is reported that the mysterious object was seen near the “Area 51”, a secret military base located in the state of Nevada. The object was transported by truck. Eyewitnesses who timely responded to the appearance of the strange cargo were able to capture it and publish photos on the Internet.

There is no official information about what the military actually transported, but ufologists have already spoken out about the origin of this object.

In particular, the famous ufologist and virtual archaeologist Scott Waring has no doubts about the alien origin of this object. He believes that a UFO crash could have occurred and it is now being transported to Area 51 for further research.