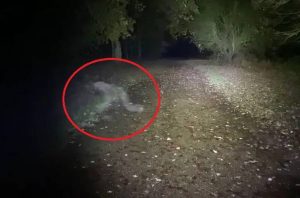 A British couple claims to have seen and filmed a ‘demonic figure’ while walking their dogs in the park. And their video really leaves a lot of questions.

The incident took place in early December 2022. Hannah and Dave Rowett, both 52, were taking their daily dog ​​walk in Clumber Park, Nottinghamshire, around 6:30 am when Hannah “felt they weren’t alone”.

By the way, a story has been circulating about this park for many years that the Gray Lady lives in it – the ghost of a woman in a long cloak. However, the creature seen by the Rowats does not look like a human at all.

While Dave was fiddling with their two Labradors, Hannah turned on her phone just in time to capture a whitish, translucent shape that crossed the road in front of them. She then showed the video she had just taken to Dave.

“I was always very skeptical, but then literally every hair on my head stood on end. I asked her to show me the video again,” Dave admits.

“Looks like we weren’t alone on our morning walk in Clumber” Hanna captioned a piece of her video posted on Facebook. The post quickly garnered over 1,800 comments and 2,800 shares.

One commenter suggested that it resembled the ghost of a dog or a fox, while another wrote “I would have goosebumps to see this. How lucky you are to see this!”

Many netizens tried to explain the footage logically, insisting that the “figure” is cigarette smoke, but the couple insist they don’t smoke, including vaping. You can also see that the ghostly shadow is much further away from the pair.

“I wasn’t scared. I was just happy to see something because I always said that I needed to see it before I believed in such things. It makes me believe that something exists,” says Dave.