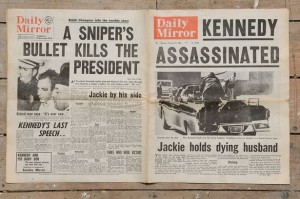 Absolutely nothing is as simple as it looks like. Don’t trust no one and someone is always watching you. This doesn’t sound to right? Sounds more like paranoia or a personality disorder. There are various things that we will never find out. Government secrets are always well kept.

Weren’t you surprised with the things you found out happening in the secret Government laboratories during the cold war? Weapons developing, genetic mutations, drugs… It all sounded like science fiction at the moment, but it was even worse than you could imagine. Who is giving us guarantee that there are no longer mad scientist experiments run by Governments? Media is playing as the government conducts, and to be frank, no one will be objective, it is impossible!

Even Hitler knew that media is a powerful weapon. Nothing can brainwash you more than television, news, movies and even music takes its part in this deception. Modern heroes are created, which are worshiped as Gods were. Idolatry at the highest level. These people can sell everything. Their words are trusted more than some journalist or even national security. Never underestimate the power of something said, specially if it is repeated frequently.

Some of the conspiracy theories are really absurd and even wacky. These are the ones you have all heard about, some are just to funny and some are creepy. When it comes down to a man who became larger than the culture he represents or the one he is from, his death is never accepted. I have told you that with mass culture idolatry is at the highest level and one can’t simply die. There must be more to it.

The assassination of John F. Kennedy, the thirty-fifth President of the United States, took place on Friday, November 22, 1963, in Dallas, Texas, USA at 12:30 p.m. CST (18:30 UTC). Kennedy was fatally wounded by gunshots while riding with his wife Jacqueline in a presidential motorcade through Dealey Plaza. The official investigation by the Warren Commission was conducted over a ten-month period, and its report was published in September 1964. The Commission concluded that the assassination was carried out solely by Lee Harvey Oswald, an employee of the Texas School Book Depository in Dealey Plaza. (Read more: Wikipedia)

There is a large number of conspiracy theories regarding to the assassination of U.S. President John F. Kennedy. The theories started to appear just after his assassination and they still appear. Many of these theories propose a criminal conspiracy involving parties such as the Federal Reserve, the Central Intelligence Agency (CIA), the KGB, the Mafia, Federal Bureau of Investigation (FBI) director J. Edgar Hoover, Vice President Lyndon B. Johnson, Richard Nixon, Fidel Castro, George H. W. Bush, Cuban exile groups opposed to the Castro government and the military and/or government interests of the United States.

Hitler is known for his tendency to rule the world and there are a lot conspiracy theories about his death. Not all people are convinced he actually died. Evil never dies easily. There are stories that his body was never found, and the one found dead was not his. There are two stories which are pretty wacky. The one is that all the Nazis with Hitler moved to the dark side of the Moon and from there are ruling the world and preparing the ground for their comeback. Another one is not so spacey, it says that Hitler is living on the North Pole! I don’t know what is with cold weather and freezing, but people like these stories.

About the experiments, Hitler approved, on humans there are a lot of stories. There is even a proof of doctor Mengele’s research on the field of genetics. This man was specially interested in twins. I’ve heard a story saying that he managed to escape to South America, and in one village, in last 50 years, there was born a huge number of twins, and you can guess they are all blond and blue-eyed. Strange?

Walt Disney transformed the entertainment industry, into what we know today. The most popular theory concerning his death is about freezing his body. Walt was very interested in possibility to freeze his body in order to bring him alive when the cure for everything is found.(Theorists seem to have derived this one from a passage in the late, great Michael Crichton’s novel The Andromeda Strain. In that book, one of the characters tells another about a top-secret U. S. government-funded medical research project which appeared to have discovered a single drug which would not only inhibit the reproduction of a bacteria in the human body, but actively kill all biological and viral pathogens known to science, without any serious repercussions to the human body. Read more: listverse) To confirm this theory many will take his movies as evidence. Why was he so interested in fairy tales as Snow White, Sleeping Beauty, etc? Sleeping for 100 years and than magically awaken. Sounds pretty much as something he was planing to do.

Another thing, when talking about conspiracy theories and Walt Disney, we must mention Illuminati. This is a very popular thing these days. Apparently, everyone who is anyone, these days is Illuminati. You will find 666 in Walt Disney sign, than media as a powerful weapon which is serving, preparing and brainwashing children for New World Order. The latest thing I’ve heard was about programing people in Disney company and many other things. Disney is pure evil according to people who claim Disney is all about Illuminati.

So, Disney is chilling in some freezer, programing people for Illuminati and New World Order. That would be in one sentence the whole Disney conspiracy theory.

Marylin Monroe the Hollywood’s sweetheart. She was the most desired woman of that time, and even today she is placed among one of the prettiest women who ever lived. Her death at such an early age was a shock to public. A beauty like that should never die. But, for most of people her death was not an accident. Her connection with the President was not the most popular one. She had to be take away.

Police never investigated her death as they should, so many questions are there to answer. Her depressions, alcohol and way of living were working against her. We will keep wondering if she committed suicide, simply took to many pills by accident or she got killed.

The initial French judicial investigation concluded the accident was caused by Henri Paul’s drunken loss of control. As early as February 1998, Dodi’s father, Mohamed Al-Fayed (who was also the owner of the Paris Ritz, for which Paul had worked) publicly maintained that the crash had been planned, accusing MI6 as well as The Duke of Edinburgh.

An inquest in London starting in 2004 and continued in 2007–2008 attributed the accident to grossly negligent driving by Henri Paul and to the pursuing paparazzi. On 8 April 2008, the day following the final verdict of the inquest, Al-Fayed announced he would end his 10-year campaign to establish that it was murder rather than an accident, stating that he did so for the sake of the late princess’s children.