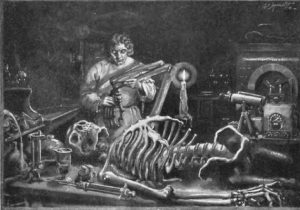 He was born at Castle Frankenstein near Darmstadt, and therefore once (at his school) the addendum Franckensteinensis and once (at his university) the addendum Franckensteina-Strataemontanus was used. He studied theology, philosophy and alchemy at the University of Giessen, obtaining a master’s degree in theology in 1693. He published many theological works under the name Christianus Democritus, and most of them are still preserved.

From 1700-1702 he engaged in a bitter dispute with the Reformed Court Preacher Conrad Broeske in Offenbach, with whom he shared millenarian hopes for soon-coming renewal in Christendom. He accused Broeske of compromise and collusion with the authorities after Broeske refused to publish Dippel’s “The Scourging Papacy of the Protestants” on the Offenbach press.

Dippel led an adventurous life, often getting into trouble because of his disputed opinions and his problems with managing money. At one point he was imprisoned for heresy. He created an animal oil known as Dippel’s Oil which was supposed to be the equivalent to the alchemists’ dream of the “elixir of life.” In 1704 in Berlin, he and the manufacturer Heinrich Diesbach used this oil instead of potassium carbonate in producing red dyes. To their surprise, they obtained a blue dye “Berliner Blau”, also called “Preussisch Blau” or “Prussian blue”. Together they founded a factory in Paris.

There are claims that during his stay at Castle Frankenstein, he practiced alchemy and anatomy. He was allegedly working with nitroglycerin, which led to the destruction of a tower at the Castle Frankenstein. But this seems to be a modern myth, for it is an anachronism. Nitroglycerin hadn’t been discovered in Dippel’s time. And although the history of the castle during Dippel’s lifetime is well documented, the destruction of a tower – though surely a remarkable event – is nowhere mentioned.

Other rumours about Dippel appear to be modern inventions too. For example, that which said that he performed gruesome experiments with cadavers, attempting to transfer the soul of one cadaver into another. There is also no evidence to the rumour that he was driven out of town, when word of his activities reached the ears of the townspeople.

Vladimir Petrovich Demikhov was a Soviet scientist and organ transplant pioneer, who did several transplantations in the 1930s and 1950s, such as the transplantation of a heart into an animal and a lung-heart replacement in an animal. He is also well-known for his transplantation of the heads of dogs, though some sources assert that these reports are false. He conducted his dog head transplants during the 1950s, resulting in two-headed dogs, and this ultimately led to the head transplants in monkeys by Dr. Robert White, who was inspired by Demikhov’s work. 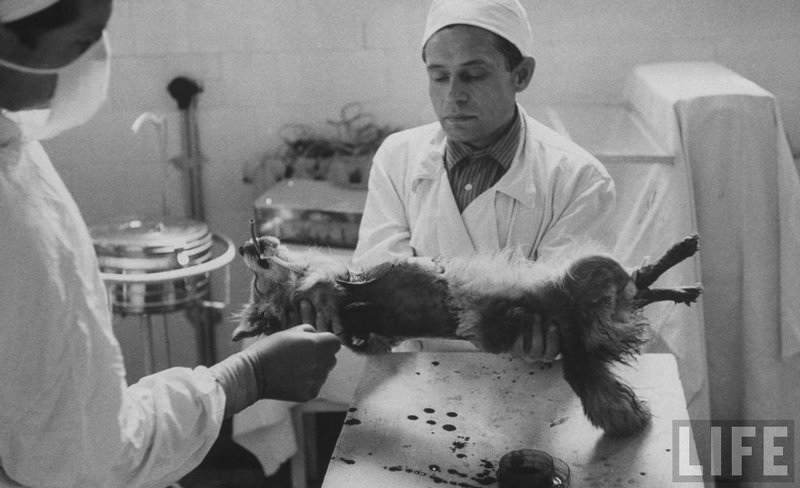 The first head transplant was actually done by Professor A. G. Konevskiy of the Operative Surgery and Topographical Anatomy Department of Volgograd State Medical University. The head transplant wasn’t planned. Konevskiy had planned an experimental heart transplant but the puppy was involved in an automobile accident. Not wanting to “waste the sterilized operating table”, the surgeon proceeded with the head transplant. Unlike Demikhov, Konevskiy is still alive.

Demikhov coined the word transplantology, and his 1960 monograph “Experimental transplantation of vital organs”, for which he received his doctoral degree, later published in 1962 in New York, Berlin and Madrid, became the world’s first monograph on transplantology, and was for a long time the only monograph in the field of transplantation of organs and tissues. Christiaan Barnard, who has performed the world’s first heart transplant operation on from person to person in 1967, has twice visited the Demikhov’s laboratory in 1960 and 1963. Christiaan Barnard through all his life considered Demikhov as his teacher.

Giovanni Aldini, Italian physicist born at Bologna, was a brother of the statesman Count Antonio Aldini (1756-1826) and nephew of Luigi Galvani, whose treatise on muscular electricity he edited with notes in 1791. 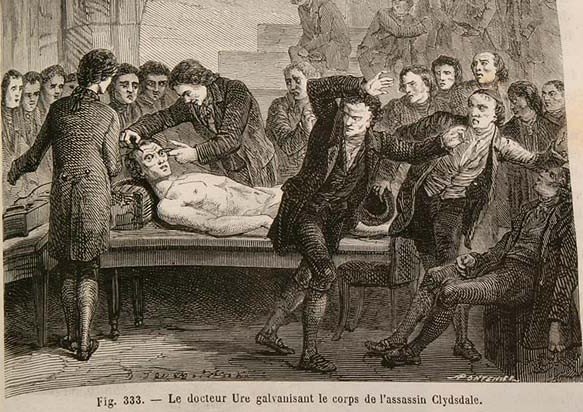 He became professor of physics at Bologna in 1798, in succession to his teacher Sebastiano Canterzani (1734-1819). His scientific work was chiefly concerned with galvanism and its medical applications, with the construction and illumination of lighthouses, and with experiments for preserving human life and material objects from destruction by fire.

He also engaged in public demonstrations of the technique, such as on the executed criminal George Forster at Newgate in London. He wrote in French and English in addition to his native Italian. In recognition of his merits, the emperor of Austria made him a knight of the Iron Crown and a councillor of state at Milan, where he died. He bequeathed a considerable sum to found a school of natural science for artisans at Bologna.

Andrew Ure (pronounced to rhyme with “pure”) was a Scottish doctor. Born in Glasgow, he studied chemistry and natural philosophy. In 1818 Ure revealed experiments he had been carrying out on a murderer/thief named Matthew Clydesdale, after the man’s execution by hanging. He claimed that, by stimulating the phrenic nerve, life could be restored in cases of suffocation, drowning or hanging. This supposedly influenced Mary Shelley when writing her novel, ‘Frankenstein’.

Ure gained fame by his speeches and writings that advocated the great benefits of industrial capitalism. His The Philosophy of Manufactures, published in 1835 played an important role in molding a public opinion on the factory system amid critical debates on factory reform and new poor laws. This set out the basis of the factory system of production. It also defended the working conditions of factories during the Industrial Revolution in Britain. 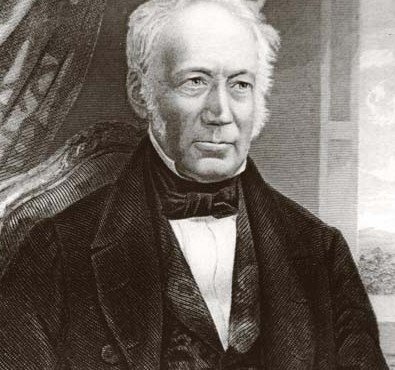 This well-known work, of which the seventh edition is now before us, first made its appearance in the past generation. During the life-time of its original projector and editor, Dr. Andrew Ure, it undoubtedly contributed largely to advance the education and progress of our manufacturing and industrial classes, and well-thumbed copies of it are to be found on the library shelves of all the “Mechanics’ Institutions” which the educational revival of thirty years ago scattered over the land.

We find from the preface that since 1858, when the present editor took charge of the work, three editions, including the present, have appeared, so that its reputation as a standard work of reference appears to be still maintained. Ure fundamentally rejected the darker side of capitalism, arguing that workers were “willing menials,” who were provided with “abundant food and accommodations without perspiring from a single pore.”

Sergei S. Bryukhonenko was a Soviet scientist during the Stalinist era. Bryukhonenko’s research was vital to the development of open-heart procedures in Russia. He was one of the leaders of the Research Institute of Experimental Surgery, where Professor A. A. Vishnevsky performed the first Soviet open-heart operation in 1957. 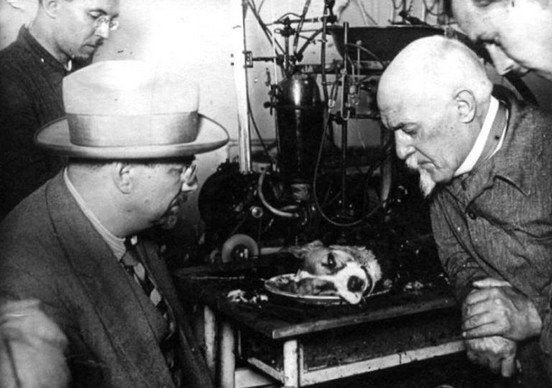 Bryukhonenko is primarily remembered for his development of the autojektor, a primitive heart and lung machine. The device was used with mixed results in a series of experiments with canines during the late 1930′s, which can be seen in the film Experiments in the Revival of Organisms.

While some today speculate that the film is a re-staging of the procedures, the experiments themselves were well documented, and resulted in Bryukhonenko being posthumously awarded the prestigious Lenin Prize.