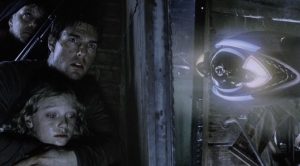 Tom Cruise is definitely a movie star. There’s no doubt that he can put together a movie that wows and excites audiences and critics alike. His name has been synonymous with film success, especially in the action genre.

Over the past many years, he has expanded his Mission Impossible franchise and started a new franchise: Jack Reacher. Since 2005, he has also begun to take an interest in alien science fiction films. As with many of these films, they beg the question: are they forbearers of what’s to come for humankind? It’s a fascinating question to ponder because of the many UFOs that have been seen over the course of our history.

Cruise’s films ask us this question: are we alone in the universe? Furthermore, they push us to reflect on whether or not we will ever make contact with them if we have not already. The aftermath of what alien contact means is the focus of all his films.

Pondering that most important question is something that sets Cruise apart from the usual Hollywood crowd. His films are interesting in bringing us into a world that has been decimated by aliens. Take War of the Worlds, a 2005 adaptation of H.G. Wells’ novel.

That film focuses on Cruise as a father to Dakota Fanning and Justin Chatwin as aliens are attacking earth. His character is a divorcee and not someone who readily enjoys having to take care of his kids. When the aliens invade, it pushes him to step up and reveal the true father he really is. Nobody forces this out of him but he chooses to do so. Such a film shows us both the best and worst of mankind. If you look at Oblivion, it’s a much different story.

This world had been decimated by the aliens and Cruise’s character is meant to watch over earth before they all make their journey off planet. The question is just how did this all come to be and that’s revealed over the course of it all.

Edge of Tomorrow is another intriguing film choice, which shows Cruise battling aliens in the middle of war. It’s likely how things were before earth became nuclearized in Oblivion. This actor continues to position himself as the premiere sci-fi actor of his generation. Why is that? For better answers, it might help to look closer at Cruise’s statements.

In June 2005, Cruise told a German newspaper that he believed we were not alone in the universe. “Yes, of course,” Cruise said. “Are you really so ignorant as to believe we are alone in this universe? Millions of stars, and we’re supposed to be the only living creatures? No, there are many things out there, we just don’t know.” Cruise was 42 at the time. As the years have gone on, much has been added to Cruise’s fascination with aliens.

In September 2007, Cruise was reportedly beginning construction on an alien bunker. It was said he was going to create a $10 million bunker under his Telluride, Colorado estate. The bunker featured a high-tech air-purifying system, which could support 10 people for years.

Fast forward to January 2013, and it is reported that Cruise seeks to save us from the aliens inside ourselves by converting us all to Scientology. Cruise has been a follower of Scientology for a long time.

L. Ron Hubbard, the founder of the religion and a science fiction writer, believed Xenu, the intergalactic ruler, directed aliens to earth. The aliens were then destroyed by hydrogen bombs in a volcano. Said aliens would attach their souls to chosen humans aka thetans, who would eventually go onto be saved. That’s about the gist of Scientology. Is this version of the alien narrative true?

Much of it could be. It’s fascinating to wonder just which version of the alien narrative is accurate. Scientology has been a controversial religion since its founding but is it possible that Hubbard was onto something and Cruise has become his messenger to the people?

“I don’t think you can actually count it out,” Cruise said. “It might be a little arrogant to think we were the only ones in all the galaxies throughout the universe – but I’ve never met one.” He also stated he would love the chance to visit space one day.

“Who wouldn’t want to do something like that?” Cruise said. “I’m going to let a couple of other people test it out first but it would be great. I was always hoping when I was a kid that we would be traveling to different planets by now.”

If we were traveling to space, wouldn’t that put us at risk of coming across Xenu? The question is a potent one at best. While we may not be the only ones in the universe, it will be tough to figure out which version of the alien narrative is true. Cruise certainly believes in them and wants to make contact but figuring out whether Hubbard’s take on it is valid or not is difficult.

If it is not, then we are left to fend for ourselves and develop our own conclusions about exactly why aliens have chosen our planet and what they wish to do with us in the future.