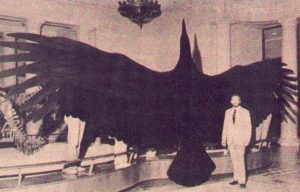 There have been many reports of Thunderbirds in the United States and at least one terrifying encounter. What might this strange winged creature be?

Cryptids, also called Unidentified Mysterious Animals, UMAs, have been sighted by many people.

Some, like the coelacanth, a fish, were believed to be extinct until the first one was caught. Others, like the African herbivorous okapi were thought to be mythological, until it was discovered around 1900. Others, like Sasquatch, have been sighted, but not captured or killed.

The Thunderbird belongs in the last category in the field of cryptozoology.

Native tribes all across North America, especially along the Pacific coast and in the Great Lakes area, have stories depicting enormous birds of prey. Some stories told that these birds were so large and powerful that when they flapped their wings, thunder was created.

Lightning flashed out of their eyes, and water fell off their backs, creating rain. The tribes used thunderbirds to explain some of the things that happened naturally, such as storms and other forms of weather.

The legend of Passamaquoddies, for example, describes the quest of two Native Americans in search of the source of thunder high in the mountains. Other stories said that there was a thunderbird who battled an enormous killer whale.

When the two beasts fought, they destroyed much of the land, knocking down trees and causing much destruction. Although dangerous and powerful beings, thunderbirds were also seen as benevolent nature spirits, and they sometimes assisted the tribes in their search for food during periods of famine.

The igneous rocks known as thunderstones are the eggs of these creatures according to some legends.

The majority of the sightings are in the Black Forest of Pennsylvania, Illinois and the Ozarks.

The Thunderbirds’ wingspan ranges from 15 to 20 feet and it is about four to eight feet tall and dark in color.

Unless noted, these sightings were in Pennsylvania:

1948: Many people saw a huge bird resembling a condor near the Illinois-Missouri border.

1969: Clinton County sheriff’s wife, Mrs. John Boyle, saw one while she was sitting on her porch in Little Pine Creek. Three men saw a Thunderbird carrying a fawn near Kettle Creek.

1973: Robert Lyman saw one in Coudersport. It was sitting on a road, then flew into the dense woods. He judged the wingspan to be approximately twenty feet.

1975: Walnut Creek, California residents saw a bird, over five feet tall with a vulture-like head and grey wings. In nearby East Bay people saw it or one like it sitting on a roof.

1977: In Lawndale, Illinois, 10-year-old Marlon Lowe and two friends were playing when they saw two huge birds. One boy jumped into a pool to avoid them. Marlon was seized by one of the birds and lifted two feet off of the ground. His parents and two of their friends heard him scream and ran after the bird. The bird dropped him after traveling forty feet.

They said the bird resembled a condor. A woman in Armington saw a similar or same bird three days later. Six people in McLean County had the same experience. The following morning, between Armington and Delavan, James Majors, watched two huge birds. One grabbed a 40 to 50 pound pig and flew away.

The next month, John and Wanda Chappell observed one for five minutes and documented the sighting. It was four feet high and the estimated wingspan was ten to fourteen feet.

What Could the Thunderbird Be?

Is it possible that a prehistoric bird exists in America?

The two most likely candidates for the Thunderbird, from descriptions, are the teratorn and the pterodactyl, large predatory birds. Teratorns’ wingspans could reach twenty-five feet or more; pterodactyl’s, over forty feet. It is believed that they resembled a giant condor.