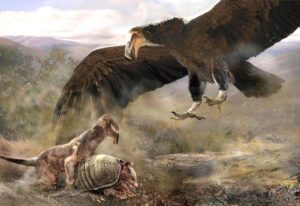 The Lawndale incident is among the most important avian cryptozoological events ever to have been investigated. It is a modern, real-life enactment of a kind of episode portrayed in folklore all over the world: the attempted abduction of a child by a Thunderbird.

Its status was recently reinforced when it was highlighted on the 1998 Yorkshire Television/Discovery Channel series on cryptids, Into the Unknown.

On July 25, 1977, as ten-year-old Marlon Lowe played outside his family home along with open fields near Kickapoo Creek, two giant birds passed over. One suddenly swooped down to grab the boy, carrying him a few feet before dropping him, apparently because of his frightened mother’s screams.

The incident occurred in front of seven witnesses, all of whom described exactly the same thing: two huge, coal-black birds with long, white-ringed necks, long curled beaks, and wingspans of ten or more feet.

“I’ll always remember how that huge thing was bending its white ringed neck,” Ruth Lowe remarked. It “seemed to peck at Marlon as it was flying away.” Though she compared the bird’s size to that of an ostrich, she said it looked like a condor. 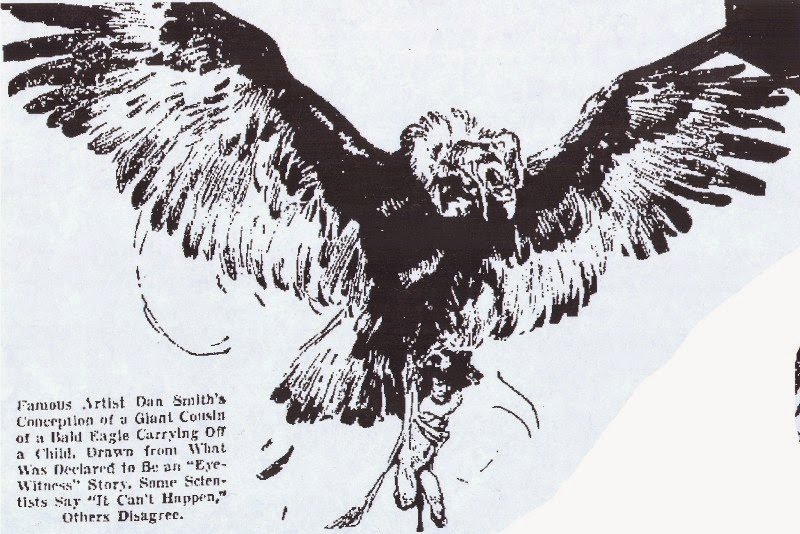 After the incident, she spent many hours in the library trying to identify the bird, without success. She rejected a local sheriff’s speculation that it had been no more than a turkey vulture.

“I was standing at the door, and all I saw was Marlon’s feet dangling in the air,” she recalled, adding the obvious: “There just aren’t any birds around here that could lift him up like that.”

Several other incidents followed quickly in the wake of the one at Lawndale. Sightings occurred in late July and early August 11, in southwestern Illinois, near Odin, the 1977 series of Thunderbird sightings publicly ceased.

Viewed by some as a tall tale, from the beginning, the Lawndale Thunderbird was compared to an Andean condor, because the descriptions given by the witnesses of these birds match that of an Andean condor: a large black bird, with a white ringed neck and a wingspan up to 10 feet (3 m).

Due to the size, speculation next ran to a surviving population of Teratorns to take into account the long history of Thunderbird sightings, and the three principal migration routes: (1) out West, (2) up and down between the Ozarks, through Illinois, into the Wisconsin Dells, and (3) from the Balds in the Carolinas north along the Appalachian Mountains.

However, an Andean condor’s talons are not strong enough to lift heavy objects. Loren Coleman and his brother Jerry interviewed several witnesses after the reported event.

Officials had begun telling the newspapers that people were seeing turkey vultures and letting their imaginations run away with them. The Lowe report, impossible to square with turkey vultures, was dismissed out of hand. As public ridicule was setting in, witnesses grew quiet about what they were seeing.