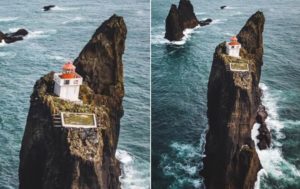 The Þrídrangaviti lighthouse is precariously perched atop a rock pillar in the Westman Islands, which are about 4.5 miles from mainland Iceland. Þrídrangar itself means “three rock pillars”.

The whitewashed lighthouse is at the top of the tallest of the three rocky cliffs, which stretches 120 feet upward. The Þrídrangaviti lighthouse is arguably the most isolated lighthouse in the world, which has led to some on the internet jokingly dubbing it a haven for introverts.

The lighthouse was built just prior to the onset of World War II, and the construction of the lighthouse was no easy task, as helicopters had yet to take to the skies when the work began in 1938… being completed in 1939. 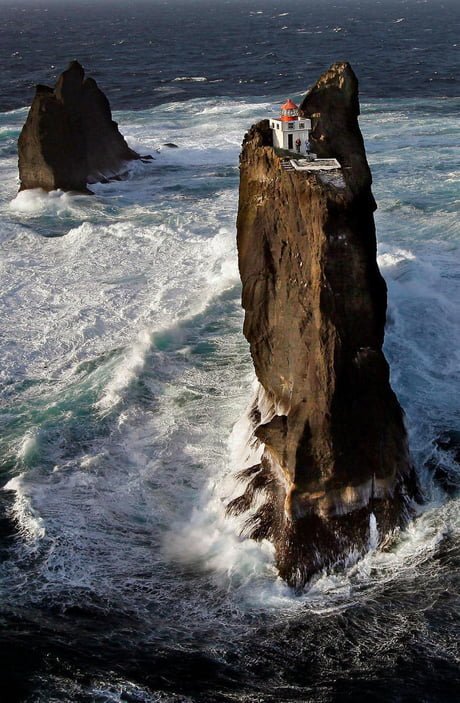 Builders scaled the cliffs to reach the pillar’s pinnacle, laying out the groundwork by hand. They faced not only the 120ft climb, but the slippery rocks, rain, and fervent winds, whilst knowing that one slip could send them plunging into the raging North Atlantic Ocean below.

Before the helipad was built, the coast guard had to sail to the cliff and scale it. In an old article in Morgunblaðið, project director Árni G. Þórarinsson described how it was first built:

“The first thing we had to to was create a road up to the cliff. We got together a team of experienced mountaineers, all from the Westman Islands. Then we brought drills, hammers, chains and clamps to secure the chains.”

“Once they got near the top there was no way to get any grip on the rock so one of them got down on his knees, the second stood on his back, and then the third climbed on top of the other two and was able to reach the nib of the cliff above. I cannot even tell you how I was feeling whilst witnessing this incredibly dangerous procedure.”