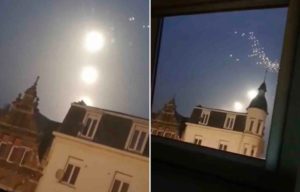 “The 3 orbs stayed in the same position in the sky (they almost looked like giant moons) for a short period of time, before moving, disappearing, and never returning”, wrote Madison.

As the video became popular on social media, comments from users began to pour in.

Some of them confessed that they saw something similar: “This is almost the same thing that I, my two brothers and my mother saw outside her back window at the age of 11 many years ago. There were from eight to nine luminous balls, which slowly glided across the sky, without rising or falling, and these balls were blinding, ”one of them wrote.

Many comments leaned towards the version that they were crane lights, but Madison firmly assures that she checked this.

“It was definitely one of my first guesses, but I noticed a slight difference from the usual crane lamps, they were too big, and the fact that they completely disappeared in less than a minute is strange too. Then I surveyed my entire territory, including the place where I saw it, and did not find any construction crane nearby that could explain it. ”

The version that these were lamps on a large construction crane does not hold water.

“The small lights in the upper right corner were a reflection of some Christmas lights that I have hanging up in my flat – those weren’t part of it”, added woman.