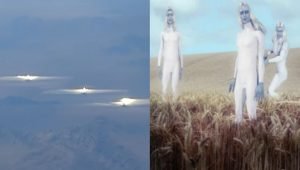 A well-known UFO researcher from Taiwan, Scott Waring, shared with readers of his blog an unusual footage sent to him by an eyewitness – a passenger of the plane.

The man flew to Las Vegas and noticed three bright objects below between the mountains. According to an eyewitness, these lights were located about 15-20 miles west of the city.

The video, unfortunately, cannot show how bright these objects were, as it was a sunny day and the objects glowed like giant welding torches, the light of which could be seen for tens of miles.

Scott Waring is sure that UFOs are visible at this place for a reason.

“This is the exact same region that Charles Hall marked as the Tall White Alien base. The Tall White base is a base of aliens that have a height of 2-3 meters tall depending on age, they live up to 800 years where they choose to die out of cultural beliefs. The base is on Nellis AFB’s private protected land, so it’s surrounded by barbed wire fence and its near Area 51. This is the best example of a Tall White ship I have ever seen! Fantastic catch, and may never be seen again,” says Scott.

Charles Hall, a nuclear physicist, ex-military American weather specialist and author claimed that the United States military has been in contact with an alien species for years.

“In 1964, when I was a weather observer at Nellis Air Force Base in Nevada, I witnessed interactions between the military and a group of mysterious tall, white, human-like extraterrestrials,” the Vietnam veteran said from his home in Albuquerque.

He said US officials had kept it all quiet because people weren’t emotionally ready to accept alien life forms.