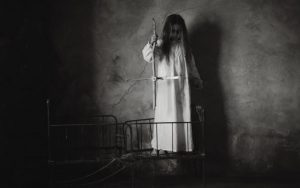 I visit and read a lot of the stories and personal encounters posted on the paranormal sites. After days of deliberating , I thought might as well post what happened to me when I was all of 17 (I am 29 now).

I belong to India and come from a mixed parentage (by Indian standards) where my mom is an east Indian Christian and my dad is a west Indian Hindu. We as a family are not much into discussing religion and spirituality, so the question of open discussion on what happened to me never did arise. My mom being the only one who gave me a sympathetic hug after I told her about it.

This episode that I am about to mention now happened to me at my mothers village in east India, My granny (Mom’s mom) lived there till she passed away at a ripe old age of 91, which was in 1996. The family on my mothers side used to be landlords in that area and at one point of time, when my granddad was alive, owned almost all of the village and the fields around it, which the used to sublet to various farmers. My granddad and his younger brother(hereafter called Maken) jointly held the ownership of the land. My granddad passed away in 1977 and his younger brother followed him a couple of years later. At the time of their deaths- both of them had never seen me) I had seen my granddad’s picture often enough but had NOT EVEN seen a picture of Maken and had no clue what he looked like) as I was abroad with my parents since my birth and got back into India in 1982. Granny however always told me of the good old days.

After the death of my grand daddy and his brother, the land was being looked after by my granny and her sister-in-law (Maken`s wife). As all the younger kids moved to the larger cities after their education and that left just the 2 old ladies there, most of the lands got taken over by refugees from Bangladesh and various other encroachers and what we had left was maybe a 30-40% of the original spread.

Now to give a brief layout of our house there (Important later)- My granny stays in a single story house consisting of 5 bedrooms built in a “C” shape around a courtyard, one living room with a kitchen as an extension to the main living room that shot off like an arm from the lower end of the “C” shape. The toilets are outside the house, maybe a 100 feet away on one side of the kitchen and the bathrooms same distance away on the other side. Being a village that had no electricity and water supply in 1990. The water for daily use was drawn from hand pumps. Immediately in front of the kitchen back door was a “family trail”(used only by the family members) that wound its way around a small pond and thick bushes and when on to Maken’s place which was right next to ours, around a quarter of a mile away. Beyond the pond were the huge cornfields and betel nut orchards till the river, a mile away.

Being from the city, I found it a pain to draw water from the hand pump while taking bath- so I was given 2 options, I could either take bath at the river OR go to Maken`s place and use their recently “renovated” bath room that had a small generator that operated a water pump and thus had taps and a shower!! Needless to say- off I went to the luxurious bathroom, which happened to be a 5X5 feet square area where the walls were chest high to me ( I was 6 feet plus even then) and I had a clear view of the main gate for entering into the property.

So coming to the main set of events now- On that particular day, It was my first day at the village, I remember telling both my grannies how I missed seeing Maken and my grandpa and wished they were around to show me the place. At around 4:00 PM, I decided to take a bath and proceeded towards the bathroom described above. My granny got busy with making the dinner and the other granny (Maken`s wife) went towards the corn field to supervise the servants working there. As the bathroom was outside their house, it did not matter to me that there would be no one present at her place.

I got to the bathroom proceeded to lather myself up. I was facing the main entrance to the property, which is 50 feet away from the main gate of the house, so I had a sideways look at the house entrance as well as the main gate. As I lathered my face and then was just turning on the shower, I saw an oldish gentleman, dressed in starched white, with a walking stick, casually strolling in from the main gate towards the house. When he reached the main entrance of the house, he just turned 90 degrees from there and proceeded towards me. All this while I could see him as clearly as anything else. He was solid but the clothes were so white that they actually looked to be sort of shining.

He passed the bathroom on the footpath, maybe 3-4 feet away from me. I was more embarrassed than anything, thinking it was a visitor for my granny and here I was with soap all over me, so I said a tentative “hello” to him and he walked by without even looking at me, which I thought was pretty rude considering that everyone else in the village was extremely friendly had a tendency to talk for hours together!! Anyway, I saw this gentleman walk down the footpath and towards the corn fields. I finished my bath and went back home.

My granny, as I told u was making dinner, so I told her that the other granny had a visitor to which she responded by saying that it’s the betelnut season, so its probably a buyer from the city who had dropped in to see her and the whole thing was forgotten. After the dinner that night, we went over to Maken`s house for sitting around the bon fire and my other granny denied having met anyone who had come to see her, I found it a bit strange because the man had gone towards the corn fields and with 10-12 servants plus my granny there, it was hard for him to have missed them.

Anyways, my granny (Maken`s wife) suddenly told me that she had found a picture of her husband for me so that I would at least know what he looked like and handed me a 1 X 2 feet framed picture. I almost wet my pants, because the man in the picture was the same as the one I had seen that afternoon while taking a shower!!! I could not have been mistaken because I saw him almost for 2 minutes, out of which at lest 30-45 seconds were when he was between 25 to 3 feet away from me while passing by the bathroom!!! Every detail of the face, the hair, and the expression was EXACTLY the same!

The saw me looking the way I did and asked what was wrong- so I told them that this is the man I had seen in the afternoon. To which Maken`s wife replied-“yes, it’s the betel nut season and he often comes across to check with me if the rates I am being offered by the merchants are fair enough or not. He does this during the corn season too.” She also added that he probably came by to see me as he had never seen me before.

Needless to say – I was not very thrilled by the whole idea but as I had not felt threatened or scared at any point of time during the encounter, I was not really sorry to know that he had come by to see me for himself.

The same night, while back at our own place, I insisted that I will sleep with an oil lamp burning and I got into my bed at around 11:00 PM. I was lying down with my back towards a small window that opens into the courtyard. Maybe after 2 minutes of lying down, I had a strong feeling that I was being watched, so I turned towards the window and there, in the light of the oil lamp, I saw my granddad peering into the room (I know it was him because I have seen his pictures a zillion times), looking at me thru the grill on the window. I know I was not sleeping and could not have been dreaming. The face was for real because I could see the light flickering off it. This scene was frozen for about 3-4 seconds and then grandpa gave me the most loving smile I have ever seen in my life, as if to tell me that he was glad to see me. I suddenly felt so much of warmth flooding towards me that I was almost like a blanket that I could touch and feel.

Then in the blink of an eye, there was no one at the window. I peeped out into the courtyard and there was no one there. It’s a big courtyard and there is not way anyone could have crossed that in a second that it took for me to get to that window. I waited there for almost a minute but all I could see were dark trees swaying gently in the wind and nothing more and the rectangle formed on the floor of the courtyard from the light from my window.

I went back to my granny and woke her up, told her what I had seen. She said my mother was my grand dad`s favourite child and its no wonder that they both dropped in to see me. The next day we went over to their graves in our family graveyard and I could feel that warm feeling all over again.

I have been to our village 3-4 times in the last 12 years, after this episode and I have never seen Maken and my grand dad again, but I still go to their graves every time and each time I still feel that work blanket around me, like a bear hug.

As a foot note- we also have a school in the village and Maken was the head master there. The watchman still hears his walking stick go tap-tap sometimes in the night as if he is checking if everything is all right, he has been seen walking the corridors of the school too on various occasions. There is hardly anyone in the village that has not seen Maken but I am the only one who has ever seen my Grand dad after he passed away.

I think I am lucky.