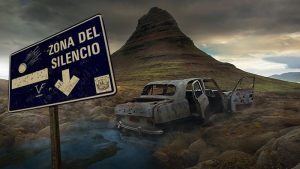 There are some places on this planet that make us realize just how little we actually know, not just about the paranormal but the laws of physics as well. A patch of desert near the Bolson de Mapimi in Mexico known most commonly as the Mexico’s Zone of Silence or the Mapimí Silent Zone is one such place.

It’s not a large section of land, and that’s probably a good thing as any type of signal, radio or otherwise immediately vanishes when you enter. Welcome to the Trino Vortex…

Mexico’s Zone of Silence was first noticed in 1930 when Francisco Sarabia, an ace civilian pilot of some notoriety in Mexico was flying his Conquistador del Cielo plane over the area and reported that his instruments went wild, and all communication equipment went dead entirely.

Not much was thought of it until in the 1970s when the Americans launched a Lockheed Martin Athena rocket, which inexplicably was dragged off course to the region now known as Mexico’s Zone of Silence where it crashed.

The lost Athena rocket was carrying two small containers of cobalt 57, a radioactive element, and this prompted an immediate response from the Americans. The Mexican government granted access to the USAF who then constructed a road for the removal of the rocket along with further study of the soil and region as a whole.

The apparent cause of the crash itself was determined as a complete loss of all communication relays onboard the rocket. Why it veered off course to the Zone of Silence could not be determined.

While pop culture has placed UFO and Bermuda triangle type phenomenon on the region in abundance, the reality is that there are numerous anomalies being studied and recorded, none of which match those sort.

The most mundane although still unusual enough to be considered an anomaly is the presence of exceptional amounts of magnetite and uranium deposits. When these two are combined there is the definite possibility for electromagnetic pulses to be emitted. That may rule out the loss of communication devices, but the other “anomalies” get much weirder.

Since the Athena crash in the 70s the Mexican authorities have established a research facility in the Mexican Zone of Silence, which many speculate is in fact a joint facility shared with the United States Air Force, and there is some evidence to this as the Americans refer to the location as the “Trino Vertex Facility”.

The Mexican authorities refer to the facility as the “Mapimi Biosphere Reserve”. The facility’s primary function is the study of mutations amongst the local flora and fauna and well as the animal population, but they are also studying “spatial and temporal distribution of human populations and land use in the MapimI Biosphere Reserve”. That’s right… the people allowed to live on the land are the subject of research and “spatial and temporal” experimentation.

A complete understanding of the causes have not been reached, however many have drawn connections between the Mexican Zone of Silence and another tremendous event that occurred over the skies of Mexico not far from Mapimi in the 1960s. On February 8, 1969 a massive fireball entering the Earth’s atmosphere over Mexico was witnessed by thousands as far as San Antonio Texas.

This was the Allende meteorite weighing approximately two metric tons. Fortunately for the entire human species the meteorite was comprised mostly of calcium and other soft rock, which allowed it to break apart but not disintegrate in our upper atmosphere.

To this day we have only located an estimated 10% of the meteorites fragments, but from these we have determined that it is one of the oldest substances in the universe that we know of, older than our solar system. The Allende meteorite itself was formed at minimum 4.6 billion years ago.

Consider the implications of this coincidence – that one of the oldest formed objects in existence fell from the sky almost directly above Mexico’s Zone of Silence weighing two tons, then 90% of it vanished.